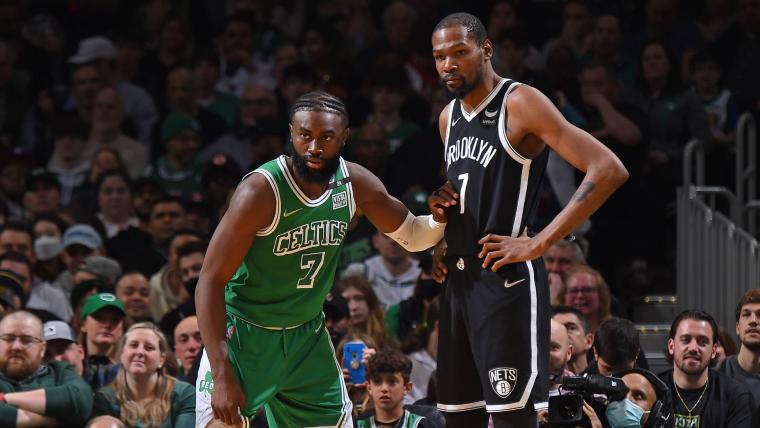 This morning, The Athletic's Shams Charania reported that the Boston Celtics have offered All-Star Jaylen Brown, Derrick White, and one future first-round draft pick to the Brooklyn Nets in exchange for Kevin Durant.

The Nets quickly rejected the offer and requested a trade package from Boston that would include at least Brown, Defensive Player of the Year, Marcus Smart, draft picks, and/or rotation players for KD.

The fact that the Celtics have already offered a trade deal that includes Jaylen Brown is massive news. It also makes Boston now a front-runner among teams working to trade for Durant. As a wing, Durant is without a question the better player. However, KD is set to turn 34 years old before the 2022-23 NBA season begins. In comparison, Brown is only 25 years old and has averaged at least 20 points per game on a minimum of 47% shooting from the field in each of the last three seasons. Last season, Brown averaged 23.6 PPG (47.3 FG%), 6.1 Rebs, 3.5 Asts, and 1.1 steals per contest through 66 games played in the regular season. Kevin Durant played 55 games for the Nets last season (only 35 games for Brooklyn in 2020) and averaged better numbers across the board. In 2021, Durant produced 29.9 PPG (51.8 FG%), 7.4 rebounds, 6.4 assists, and almost one block and one steal per contest. Durant is one of the best ballers in both fantasy and reality right now.

Still, over the last two seasons, Durant’s health, especially regarding his knee has been a source of concern. In addition, he’s only getting older. While Durant might play five or six more years in the NBA, Brown has at least 10 more seasons in him if all things continue to go well.

By offering Jaylen Brown, Derrick White, and a future draft pick to the Nets, the Boston Celtics have indicated that they are confident in where they stand as a powerhouse in the Eastern Conference. They want to win a championship as soon as possible and not risk waiting another five years to achieve such success. While the Nets have countered Boston’s first offer requesting at least Marcus Smart to be included in the trade, the Celtics have demonstrated they are willing to give up their second-best player who helped the Celtics achieve better and better results for the team in the postseason.

Let’s not forget that Jaylen Brown was a key reason Kevin Durant, Kyrie Irving, and the Nets were swept by the Celtics in the first round of the 2021-22 Eastern Conference Playoffs. In that quick four-game sweep, Brown averaged 22.5 points (49.3 FG%), 5.3 rebounds, 4.3 assists, and 2.5 steals per night.  In this series, KD shot a career-low 38.6% in this year’s playoffs on his way to 26.3 points per game (second-lowest playoff scoring average in his long postseason career).

So who would win this trade? We won’t find out until the teams come to a resolution (if they ever do). However, the Celtics would be the immediate favorite to win this year’s NBA title with Jayson Tatum and Kevin Durant shouldering most of the load. If Boston can somehow keep Marcus Smart, the Celtics could very well win the championship.