Kyrie Irving Interested in Joining LeBron James and the Lakers? 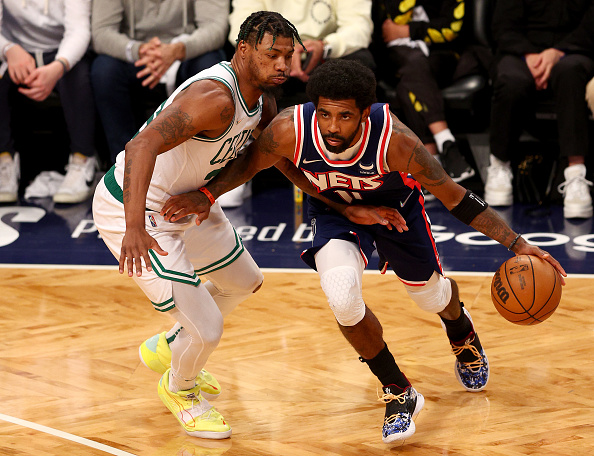 Kyrie Irving had a tumultuous season last year with the Brooklyn Nets. In fact, as a result of his decision to abstain from taking the vaccine, New York City mandates made it impossible for him to play at the Barclays Center and Madison Square Garden until the last few weeks of the regular season. As a result, Irving missed a majority of Brooklyn’s games in 2021-22. His future alongside Kevin Durant in Brooklyn is starting to come into question. Today, Bleacher Report indicated that Kyrie could have his eyes set on joining LeBron James and Anthony Davis in Los Angeles.

In Los Angeles, the Lakers failed to put together a team of NBA superstars featuring LeBron James, Anthony Davis, Carmelo Anthony, and Russell Westbrook. Specifically, AD and Russ did not contribute last season as much as people expected. AD’s injuries have limited him to a total of 76 games played for the Lakers over the last two seasons: Davis played 36 games in the 2020-21 season, and 40 games in 2021-22. His health issues continue to keep him off the court, leaving the Lakers much more vulnerable in the paint. At PG Russell Westbrook joined the Lakers last season, but simply regressed in almost every category. Though he played in 78 of the Lakers’ games this season, he only averaged 18.5 PPG for 7.4 rebounds and 7.1 assists. While these are great numbers, Westbrook certainly regressed last season after averaging a triple-double for the Wizards in 2020-21.

In 2016, Kyrie and LeBron paired up to win the NBA Championship for the Cleveland Cavaliers. In those playoffs, both players made each other better and developed a chemistry that could likely be rekindled if they paired up again. Kyrie Irving could fit in nicely with the Lakers’ core of scorers. The Lakers were originally planning on re-signing Westbrook to play for the 2022-2023 NBA season, but things could change if talks truly begin between the Lakers and Kyrie Irving. Just today, Irving received permission from the Nets to engage in sign-and-trade deals that could come his way this Summer. Along with the Cleveland championship legacy he built with Lebron six years ago, he could end up being an attractive option for Lakers’ management especially if they plan to shop Russell Westbrook this summer.