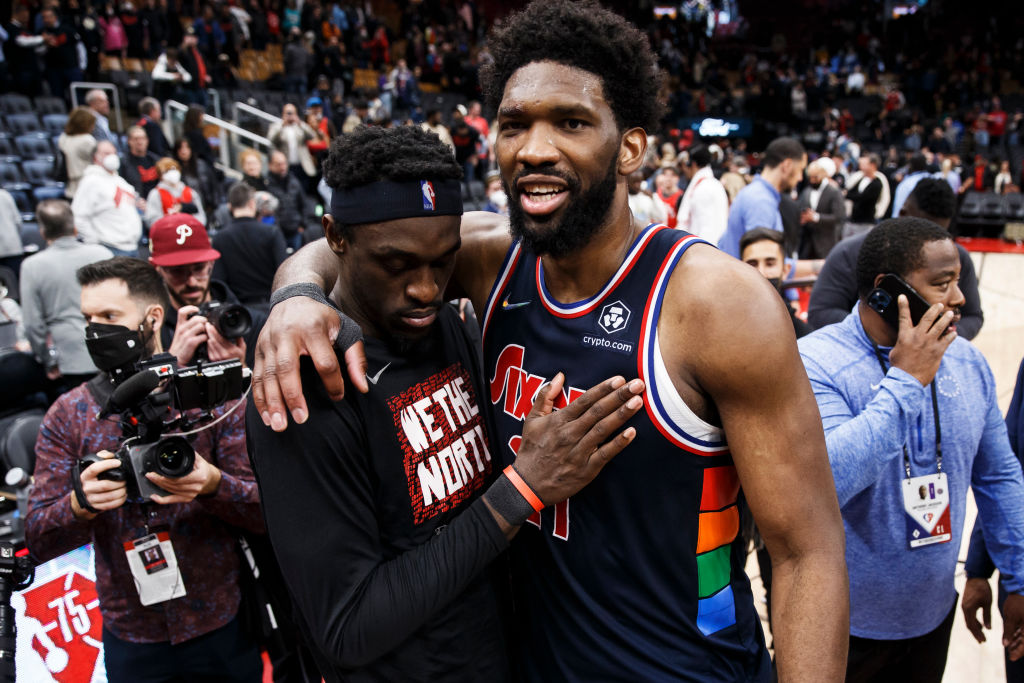 Early into the second round of the playoffs, important players on multiple playoff teams are dealing with serious injuries. Kyle Lowry has missed the Heat’s last four games due to a bad hamstring, while Joel Embiid sustained an orbital fracture and a concussion at the end of Game 6 against the Raptors. As a result, Embiid has missed the first two games of their Eastern Conference Semifinals series against the Miami Heat, both of which the 76ers lost by double-figures. Let’s take a look at the latest injury news concerning players on the eight teams that remain in the NBA Playoffs.

Man, Joel Embiid has not gotten a break this postseason. With less than four minutes left in a blowout Game 6 victory against the Toronto Raptors, Embiid took an inadvertent yet powerful elbow to the face from Pascal Siakam. After the game, he was diagnosed with a concussion and an orbital fracture.

Siakam apologized for the foul to Embiid directly after Game 6 and shared a moment with Embiid in the postgame (view article image). It's important to remember that earlier on in the series, Embiid tore a ligament in his shooting hand which he decided to play through. He’s played great since sustaining that injury despite the impact it had on his three-point shot. Embiid dominated and helped the 76ers move past the Raptors in six. For the 76ers, the main concern will be the big man’s orbital fracture that has kept him out of Game 1 and Game 2 against the Miami Heat. Bam Adebayo has been cruising in the paint without the presence of Embiid, and the Miami Heat won the first two games of the series with double-digit leads. The MVP candidate was just listed out for Game 3. If Embiid comes back by Game 4 or at any point this series, he'll be banged up and certainly not 100%.

Kyle Lowry has been out with a hamstring injury and has missed the Heat’s last four playoff games. Lowry was ruled out of Game 2. However, the Heat just updated his status to questionable heading into Game 3. Throughout this time, one player who’s had a fantastic return to the lineup has been Victor Oladipo. Oladipo only played a combined 51 through the 2019 and 2020 regular seasons and only played in eight of the Heat’s 82 regular-season games this season. Oladipo returned to the Heat in early March but truly made a splash on April 10 for Miami’s last regular-season game. He scored 40 points (13-22 FG) and produced 10 rebounds, seven assists, and two steals in 36 minutes on the floor. Over the last four games (which Lowry has been out for), Oladipo has played approximately 25 minutes per game and been pretty efficient. In two of those games, Oladipo scored at least 19 points converting at least 50% of his shots taken from the field in those contests. If Lowry returns, Oladipo’s minutes could drop back down to less than 20 MPG. While he has played pretty well when needed this postseason, Eric Spoelstra likely has more confidence in guards Gabe Vincent and Max Struss who’ve gotten a lot more playing time than Oladipo this season.

Is Dillon Brooks the new Grayson Allen? Gary Payton II sustained an elbow fracture after Grizzlies guard Brooks slammed him to the ground. This was a dirty, irresponsible, and dangerous foul that likely ended Payton II’s season. As a result, Brooks was handed a one-game suspension and will not play in Game 3.

Payton II’s impact off the bench for the Warriors is undeniable. Whenever he is on the floor, his athleticism and notably his vertical ability allow him to fly high for dunks, layups, and rebounds. As a result of the injury, he will likely miss the rest of the postseason. Even if the Warriors get to the Finals, he won’t be back on the floor in early June.

With Payton II and Andre Iguodala both out at the same time, Steve Kerr will have to dig deeper into his bench to make up for these huge losses on the defensive end for the Warriors.

Center Steven Adams has missed the last three postseason games for the Grizzlies due to COVID-19. It was reported this afternoon that Adams practiced with the Grizzlies today and should be ready to go for Game 3.

After practice, HC Taylor Jenkins stated: “He looked great in the play group, so there’s obviously confidence there (for Adams to play in Game 3).” While Jenkins did not confirm Adams would be in the active lineup for the Grizzlies’ Game 3 in Golden State, his statement expressed a hopeful degree of confidence that Adams is healthy and ready to go again. Jenkins also stressed the importance of Adams to the Grizzlies’ playoff success specifically because of the playoff experience he’s already accumulated throughout his years in the NBA: “He’s one of the few guys that’s played pretty deep in the playoffs on our roster (...) Obviously, he’s got a high (Playoff) IQ.” When healthy, Steven Adams plays about 20-25 MPG. His return should create some difficulties for guys like Otto Porter Jr. and Draymond Green who spend a fair amount of time in the paint. While it remains unclear whether Adams will play in Game 3, or how many minutes per game he’ll get when he returns to play in this series, the Grizzlies’ big man has cleared the league’s health and safety protocols and is a GTD ahead of Friday night.

Andre Iguodala is dealing with a frustrating disc injury heavily impacting his neck. This afternoon, the Warriors reported that Iguodala will be out for Games 3,4, and 5 and be re-evaluated next week. Realistically, Iguodala’s injury status suggests he will miss the remainder of Golden State’s competitive Western Conference Semi-Final series against the Memphis Grizzlies. Like Gary Payton II, Iguodala brings immediate defensive power off the bench. He’s perhaps even more valuable than Payton II because of his impressive playoff resume and experience during the NBA playoffs. We will see in Game 3 how Steve Kerr and the Warriors coaching staff makes up for both of their absences.

This afternoon, the Bucks reported that Khris Middleton would be out for Game 3 (Saturday) and Game 4 (Sunday). The Bucks’ All-Star scorer sprained his MCL in Game 2 of Milwaukee’s first-round series against the Chicago Bulls. When asked if Middleton would be ready after Game 4 and perhaps at some point this series, HC Mike Budenholzer gave a very simple but defining answer: “We’ll see.” Reports suggest Middleton is making good progress but the Bucks will not rush him back prematurely. I would think Middleton is doubtful to return at any point this series, especially because his injury was upgraded to a Grade 2 MCL sprain (More severe than a Grade 1 sprain). Since he’s been out, Bobby Portis has returned to playing 30+ minutes per game. In four of the five games the Bucks have played without Middleton since April 22, Portis recorded four consecutive double-doubles. During Game 2 against the Celtics Tuesday, Portis finished just shy of a double-double with 13 points and eight rebounds. This is because he only played 26 minutes as the game ended in a dominant blowout victory for the Celtics. The Game was over before the fourth quarter began. Portis is looking great and doing a fantastic job of playing 30+ minutes per game as a wing while Middleton continues to recover.