In Week 14, veteran stars Bam Adebayo and Malcolm Brogdon are at season-low trade values after just playing their first contests in 2022. As a result, both players are criminally undervalued, the same way Nikola Vucevic was undervalued in Week 5. Along with a few other players we've discussed before such as Devonte' Graham and John Collins, here are some buy-low fantasy basketball targets to pursue this week using FantasySP's Basketball Trade Value Charts. 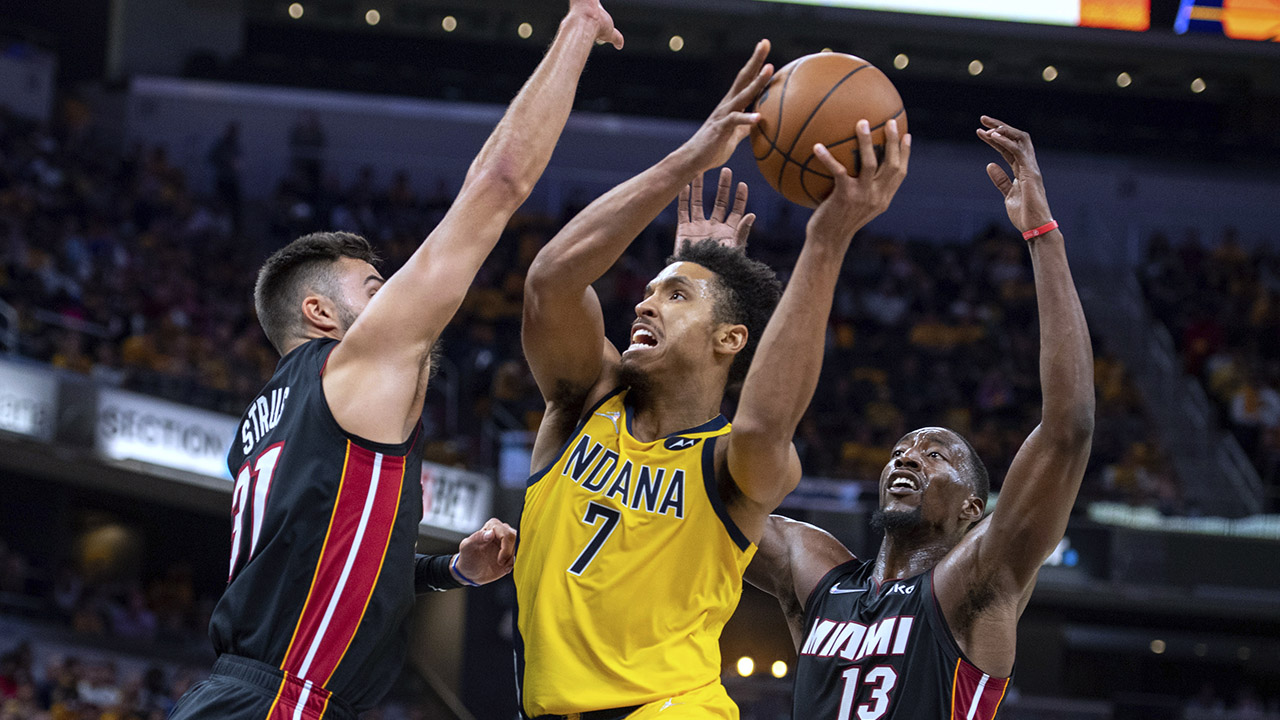 Malcolm Brogdon returned from injury on Jan. 12 but is now listed as DTD once more in Week 14. Still, his trade value has dropped to a season-low 18.73 on the Trade Value Charts among point guards. He missed time due to a lingering issue with his Achilles. Still, Brogdon has produced 18.5 PPG on 44.5% shooting from the field, 5.9 assists, and 5.2 rebounds through 27 games this season. He's also almost averaging one steal per game. He's a good ball distributor and a talented scorer as well. His season averages make his current trade value incorrect. Like Bam, Brogdon is a must-buy in Week 14.

If we are talking purely about the value and not on-the-floor efficiency, Devonte’ Graham’s current value of 13.42 on the PG Trade Value Charts brings him within inches of his season-low trade value. And he deserves it, in the sense that Graham is underperforming this season. New Orleans thought they were bringing someone capable of being hot for more than 25 minutes per game, but Graham’s efficiency on the floor this year has dipped in comparison to his last season in Charlotte where he played significantly less per game. Graham is still averaging 13.8 PPG points along with 4.6 assists and one steal per contest. What makes him undervalued is how much playing time he logs every night. This season, the former Kansas phenom is playing 31.3 MPG, a slight uptick from last season, which was significantly reduced once Lamelo Ball was healthy for Charlotte. Fantasy owners can count on getting 28-35 MPG from Graham any given night. It is very rare for him to play less. New Orleans has limited depth in the backcourt. Even though he’s shooting a bleak 36.7% from the field this season, the Pelicans put their money on him for 2021-22 and are preserving his role in the rotation despite his inefficiency and inconsistency. Take a look at his production in terms of fantasy points over his last 10 contests below.

Alex Caruso has not played since Dec. 20 but is listed as probable for Chicago’s contest tonight against the Cleveland Cavaliers. Caruso’s current trade value is below 12.0 on the Trade Value Charts. He’s millimeters away from his season-low value of 11.0 and is likely undervalued in the SG Trade Value Charts after missing so many games. In 26 games played for the Bulls this season, the Bald Mamba has produced 8.4 PPG while shooting 44.8% from the field this season. He’s also recording 3.7 rebounds, 4.0 assists, and a jaw-dropping two steals per game despite seeing an average of just 28 minutes per contest. Poised to return to Chicago’s active lineup, Caruso could erupt quickly, especially considering Zach Lavine's injury. Although Lavine won't be sidelined for very long, Caruso should slide into the starting lineup until the superstar returns to action. Caruso’s season-low trade value is noteworthy for fantasy basketball owners seeking an undervalued guard.

OG Annunoby is also getting closer to his season-low trade value of approximately 17 points. After dipping -1.6 points over the last week, Annunoby is currently listed at 18.01, placing him below Bojan Bogdanovic in the SF Trade Value Charts. He's had a very impressive stretch over his last 10 games and is certainly a more gifted player than Bojan, yet Anunoby has fallen deeply in the charts. He's averaged 18.9 PPG, 4.6 rebounds, and 1.4 steals in January. He's an ideal buy-low candidate in Week 14.

John Collins' offense has certainly decreased as of late, but in no ways should that bring his value down to where it currently stands. He missed a handful of games in the second half of December and the first two games of 2022 but has played strongly since returning on Jan. 7. He's playing to the same standard that he set in the first half of the season, which is why it is surprising that his value has dropped over the last week. His numbers this season speak for themselves and while he hasn't scored more than 16 points this year, he'll score 20+ plenty of nights moving forward. Especially with Clint Capela struggling to stay healthy for the Hawks this season, Collins is more valuable now than he was before the season began.

After missing so much time this season due to injury, Adebayo has dropped to a season-low trade value of 20.24 points. DeAndre Ayton, Jakob Poeltl, and the currently inactive Clint Capela are just a few of the bigs that are now ahead of him in the C Trade Value Charts. When healthy, Bam is better than all of those players both in real life and in fantasy. In his first game back on Jan. 17, Adebayo played 32 minutes and finished with 14 points and nine boards. Despite his rusty offensive debut (4-of-14 from the field) in 2022, Bam still produced approximately 30 fantasy points in his first game back. He’s only played 19 games this season, and I don’t think I need to say much more about how undervalued he is. In the Week 5 Trade Value Chart article, I suggested everyone go after the undervalued Nikola Vucevic, who was valued in the low twenties. His current trade value is above 31.0. How high do you think Bam’s trade value will skyrocket in a few weeks?