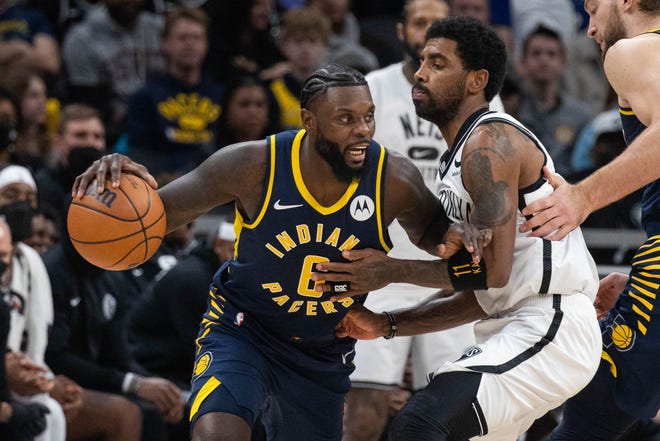 The Pacers are currently lacking depth in the backcourt. As a result, the Pacers signed Keifer Sykes for the remainder of the season. Though he played a maximum of 11 minutes in his first two appearances for Indiana, his performance over the last three games (Jan.2-Jan.5) has been impressive. He’s produced at least five assists and scored in double figures in each of those contests. With so many members of the Pacers sidelined due to injuries and COVID-19, Sykes is worth a look on the waiver wire heading into Week 13 of the fantasy basketball season. He won’t be this widely available for long if he continues to produce so effectively in the points and assists categories. He’s averaging close to 26 FPTS per game over his last three games.

Lance Stephenson took advantage of his 32 minutes on Wednesday almost as effectively as he was at getting inside LeBron James’ head throughout his career. He produced a whopping 30 points (12-19 FG), three rebounds, and five assists. Stephenson played six games for the Hawks before being signed by the Pacers. He’s played three games for Indiana so far this season and has produced 13.7 PPG on 54.8% shooting from the field in 20.7 minutes per contest. Though he hasn’t played enough games for these statistics to be reliable indications of his play for the rest of the season, Stephenson is off to a hot start in Indiana and can be claimed from waivers in more than 90% of fantasy basketball leagues right now.

One of the consequences of how COVID-19 has impacted the NBA this winter had some blessings in disguise. I have enjoyed watching these retired veteran players who I grew up idolizing come back to show that they still have game. These 10-day contracts are a priceless gift this NBA season. Man, did I miss Lance Stephenson, and I’m saying this as a Knicks fan. During the 2012 NBA Playoffs, Roy Hibbert, David West, and Lance Stephenson silenced the only playoff run Carmelo Anthony had in New York. He’s remembered as a player who played the mind game. In the Eastern Conference Finals and multiple encounters against LeBron James throughout his NBA career, Stephenson has successively gotten into his opponent's heads. Once distracted, he attacks and punishes his competition. We will see what he brings in Indiana in the games to come, but he's off to a hot start.

Quickley is now rostered in 28% of fantasy basketball leagues. At the end of last week, Quickley was available in more than 80% of all leagues. With Derrick Rose out for at least another six weeks, Quickley has seen an uptick in minutes and offensive touches. Though he missed four games due to COVID-19 between Dec. 18 and Dec. 25, Quickley is now playing close to 25-30 MPG compared to the 15-25 MPG he was logging earlier this season. He is still an inconsistent shooter, only converting 38.0% of his shots taken from the field. However, his increased role in December is likely to continue over the next few months.

Quickley is a player capable of erupting quickly (no pun intended) and out of nowhere. This comes at the cost of him sometimes connecting on just three of four field goals despite several attempts. However, one of his most valuable attributes is his high free-throw percentage. He currently leads the NBA with a 94.1 FT%, 2.4 percentage points more than Stephen Curry’s 91.7 FT %. This makes up for Quickley’s bad shooting nights, as he can produce points by drawing fouls driving in the paint. Quickley is at the very least worthy of a bench spot in fantasy basketball leagues. Especially with D-Rose sidelined indefinitely, Quickley is the Knicks’ best available guard behind Kemba Walker and Alec Burks.

Caleb and Cody Martin feed off of each other. Both players seem to be improving at a very encouraging rate. Caleb Martin’s role in Miami, however, is more secure than his brother Cody’s role in Charlotte. Largely, the setbacks facing the Miami Heat’s roster this season have opened the door for guys like Martin to pop off. He’s shooting 50.5% from the field this season and is demonstrating what he is capable of when called upon. Though he is averaging a mere 22.4 MPG on the season, Martin has played a minimum of 29 minutes in his last six consecutive games. He shot at least 45% in each of those games and scored in double-figures in all contests besides an eight-point night against the Wizards on Dec. 28. He’s not a big rebounder or playmaker, but he can produce solid offense. Though he is averaging 3.6 rebounds per game, he’s grabbed 32 over the last six games (six rebounds per game over that span). While the Miami Heat roster is still dealing with injuries and COVID-19 cases, Eric Spoelstra can consistently rely on Martin to produce solid numbers until Jimmy Butler and the rest of Miami’s core roster returns to action. It might be time for fantasy owners to do the same.

Terrence Ross missed seven straight games between Dec. 17 and Dec. 30. He returned Sunday night and lit up the stat sheet for 33 points (11-19 FG), five rebounds, and three steals in 35 minutes. His ability to go off and shoot for 30+ or 40+ points is sort of his trademark. The unfortunate aspect of his game is his inconsistency. He could score two points one night, and erupt for 30 the next. Even before he missed that stretch of games in December, Ross was producing big numbers. He has scored a minimum of 15 points and produced at least 24 FPTS in each of his last seven games. T-Ross is starting to play closer to 30-35 MPG, which is considerably up from his 25.5 MPG this season.

Rudy Gobert just entered the league's Health and Safety protocols. As a result, Hassan Whiteside should see a significant increase in minutes and production. This pick only applies to Week 13, as Whiteside is the best available big on Utah’s roster behind Gobert. Whiteside should start in Gobert’s absence, but once Utah’s premier shot blocker returns to action, Whiteside will go back to playing just 15-20 MPG. Additionally, Whiteside has missed the last two games due to a concussion and is questionable to play Friday. Since Gobert is likely to miss most of, if not all of Week 13, Whiteside is a decent streaming option at the center position next week. Don’t expect astronomical numbers, but he could average 10 points, 10 rebounds, and a block per game while Gobert remains out of the lineup.

Despite averaging only 16.8 MPG this season, Gary Payton II has worked his way up the basketball ladder to earn a roster spot in Golden State by shooting 64.2% for 7.8 PPG. Payton II might be one of the hardest-working players in the league, and his energy on the floor is exquisite. Though his minutes are low and he will be competing with Klay Thompson for minutes once the sharpshooter returns to action, Payton’s hustle on the court gets him steals, a very valuable category in all fantasy basketball formats. Despite his limited minutes, he’s averaging 1.4 steals per contest. Elsewhere, his athletic ability and vertical jump height allow him to grab many rebounds. For instance, Payton II produced an 11-point, 11-rebounds double-double on Wednesday, converting all five of his shot attempts in just 24 minutes. He even chipped in with three assists and two steals and finished the night with 32 FPTS. It was his second straight game with 30+ FPTS.

Despite his limited playing time in Golden State’s rotation, Payton is statistically one of the most efficient players in the NBA. His will to build his legacy that at least distinguishes him from his father’s Hall-of-Fame career in Seattle motivates him to play harder. He’s got a chip on his shoulder, and his relentless energy on the floor is impossible to not notice. Payton II is a player worth adding off the waiver wire if you need hustle stats. Plus, Golden State has four games in Week 13, which means he is worthy of a starting spot in weekly formats.

The Chicago Bulls couldn’t stay healthy in December, especially because of how COVID-19 spread ferociously through the Bulls locker room. With so many changes to the active roster, White has demonstrated his ability to be a productive guard on a team where he was replaced by big-name stars this summer (Lonzo Ball and DeMar DeRozan). Though he’s averaging 24.3 MPG this season, he’s played at least 32 minutes in six of his last seven games. Over the last four games, White has scored at least 17 points on mostly very efficient shooting nights. He’s shot at least 50% from the field over the last three games and has produced a 47.3 FG% over his last 10 contests. In comparison to his season averages of 10.8 PPG on 42.3% shooting from the field, White is clearly progressing in 2022. Though he is starting to become unavailable, White remains up for grabs in many fantasy basketball leagues and is certainly worth picking up for Week 13 as the Bulls play four games and will still be without Alex Caruso.