As we head into Week 12, the impressive efficiency of rookies Evan Mobley and Josh Giddey in Week 11 should carry over. While Mobley returned after missing four games to continue dominating in the post, Giddey became the youngest player in NBA history to record a triple-double last night. Carmelo Anthony, Derrick White, and Terance Mann join the red-hot rookies as must-start players in Week 12. 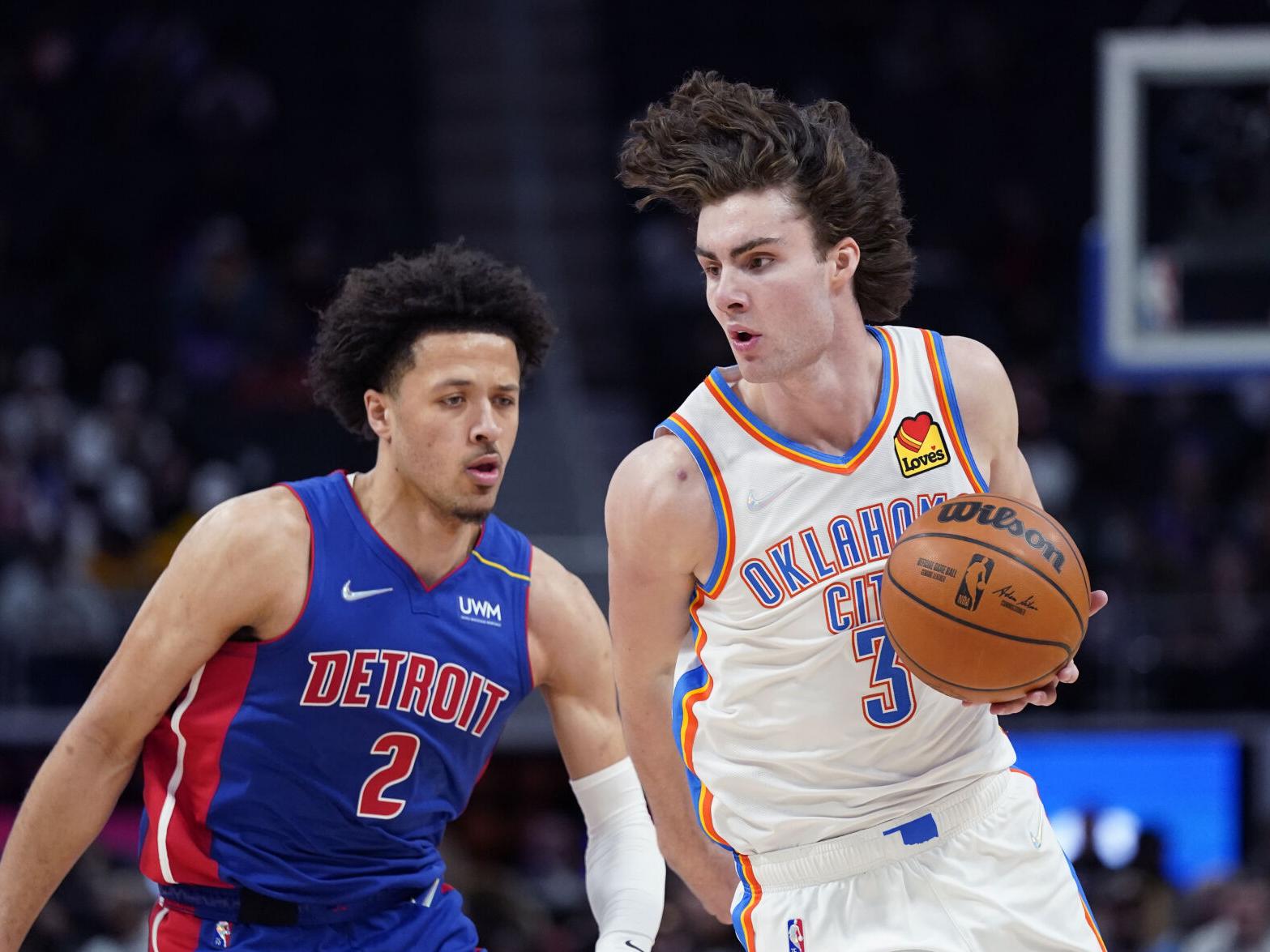 The Spurs are currently without Dejounte Murray in addition to scorers Lonnie Walker IV and Doug McDermott due to COVID-19. Derrick White has produced strong numbers over the last few weeks, even when these players were active. White will need to take more shots in Week 12 as a result of his teammates' absences. He produced an 18-point, 14-assist double-double on New Year's Day and played a hefty 42 minutes. Although his only official double-double over the last 10 contests came on Sunday, he would have produced six to seven double-doubles over that span had he recorded two to three more points or assists in several outings. He's a consistently efficient and productive point guard who the Spurs can rely on any given night and who you should absolutely start in Week 12. It doesn't hurt that the Spurs have four games on the schedule this week too.

The Clippers are hurting this week as a result of COVID-19. This includes sharp shooter Luke Kennard. In addition, Paul George’s ligament tear in his elbow will keep him sidelined for multiple weeks while Nicolas Batum's consistent absences from the lineup (simply unhealthy) leave plenty of room for Terance Mann to execute. The Clippers really need him to score this week, and hopefully, that pressure pushes Mann to produce more than usual. Right now, he is one of the Clippers' best available scorers. The team plays four games this week, and Mann will likely see 30+ MPG. If he doesn't score in double-figures in most games this week, it will be because he shoots poorly. However, Mann has been a very good shooter this season. He's put together a 49.2 FG% this season in 29.6 MPG (last season as a sophomore he shot an outstanding 50.9% from the field through 67 games). Though he is only scoring 10.7 PPG, his impressive conversion rate from the field this season indicates that he's a scorer who takes smart shots and does not force them much. He will see an increased role this week which should be mirrored by an uptick in PPG.

The rookie has officially cleared Health & Safety protocols after only missing three contests. Oklahoma City plays four games this week, and Giddey’s return is much needed. Giddey has had an impressive rookie campaign. His 2021-22 season averages demonstrate how complete of a player he is and how active he is in the games he plays. He is averaging 11.0 PPG, 7.3 REBs, 6.4 ASTs, and one steal in 30.2 MPG. Last night, Giddey returned to face-off against the Dallas Mavericks. He erupted for a massive triple-double, recording 17 points (7-16 FG), 13 rebounds, 14 assists, and four steals through 36 minutes played. As of last night, he is the youngest player in NBA history to record a triple-double. With OKC’s packed schedule this week, Giddey is a fantasy must-start in Week 12.

Since joining the Pelicans, Graham has been underwhelming. Personally, he’s one of the players who I thought would flourish in NOLA, especially because they have very few good guards. In Charlotte, Graham played alongside Terry Rozier and LaMelo Ball. He had fewer minutes and opportunities to score in Charlotte than he does now in New Orleans. He's shooting a bleak 37.3% from the field and only producing 4.6 assists per game. Though he has scored in double figures over the last seven games, his unreliable and frankly disappointing offensive production is more of a red flag than it was at the beginning of the season. Since the Pelicans only play two games this week, it is a safe bet to keep Graham on the bench this week.

Wings To Start In Week 12

Melo has scored at least 16 points in three of his last four games. The Lakers will be without Anthony Davis for at least the next four weeks due to a sprained MCL. To make up for his absence, it is very likely that Anthony sees a consistent uptick in minutes in the weeks to come. This season, Melo is playing with a certain degree of confidence and responsibility that he found in Portland and built on so far in Los Angeles. He offers immediate offensive production for the Lakers off the bench. He will likely play closer to 30 MPG than 25 MPG for the next three to four weeks. As a result, his production should increase. Specifically in Week 12, Lakers forwards have pretty advantageous matchups. The Lakers take on the Houston Rockets (third-Worst NBA defense guarding opposing forwards) on Tuesday followed by the Memphis Grizzlies on Wednesday. Both Memphis and Houston allow at least 82 FPTS of offensive production to forwards. L.A. forwards will have average defensive matchups at the end of the week against the Portland Trail Blazers and the Minnesota Timberwolves. The advantageous schedule Lakers forwards have this week combined with the absence of Anthony Davis make Melo a must-start in Week 12. He will likely be someone to start in Week 13 and Week 14 as well.

Tobias Harris has underperformed as of late. Though he is shooting 45.2% from the field this season, he shot three-of-12 and four-of-14 respectively in his last two contests. As the 76ers only play two games this week and Harris has been inconsistent as of late, he can keep your bench warm in Week 12.

The Knicks are currently without the following big men due to COVID-19: Mitchell Robinson, Jericho Sims, Nerlens Noel, and Julius Randle. Obi Toppin is the team's best available PF until Randle returns. In Sunday’s contest against the raptors, Toppin played a whopping 45 minutes. He produced a well-rounded stat-line with 19 points, six assists, six rebounds, one steal, and two blocks. He will likely play 30+ MPG in the four games the Knicks play in Week 12. In his second season, Toppin has become more confident driving the ball to the basket utilizing his size and athleticism to produce powerfully in the paint. Last season, Toppin settled for too many three-pointers and jump shots. This season, he is driving the ball to the rim, dunking, and competing with opposing bigs to grab rebounds. Even if his production drops slightly, the Knicks depth chart and particularly the roster’s lack of size in Week 12 leaves Toppin with big shoes to fill. For the first time this season, Toppin is a strong power forward option to start in weekly fantasy basketball leagues.

The No. 3 pick in the 2021 NBA Draft can hoop. As a rookie, his production as a big man is impressive. He's averaging 14.7 PPG, 8.2 REBs, and even 1.8 BLKs in his first NBA regular season. Mobley missed four games between Dec. 15 and Dec. 26 due to Health and Safety protocols. Mobley has played four games since then and has been on fire. He's scored a minimum of 16 points and recorded a minimum of five rebounds in the last four games. Performances like last night's against the Pacers reveal the kind of value Mobley offers. He scored 24 points (11-26 FG), grabbed nine rebounds, and dished four assists. He is one of the most valuable assets on the Cavs' roster, and should be locked in tas a starting center in Week 12. The Cavaliers play four games this week and Mobley will continue to dominate. I am confident that he reproduces statistics in Week 12 that at least resemble what he's accomplished over the last four contests and through Week 11. Mobley is as promising at the center position as Giddey is running the point.

Luke Garza has taken over for Isaiah Stewart at least for the time being as Detroit’s starting big man. He has played pretty well filling in for Stewart. For instance, Garza recorded a 20-point, 14-rebound double-double on New Year’s Day. However, consistency seems to be something Garza struggles with. In the game that preceded the Jan. 1 contest, Garza scored only four points (1-10 FG). As a big man, his field-goal percentage is low, resting at 44.1%. Especially since the Pistons are only playing two games in Week 12, make sure you don’t start Garza despite the fact that he is starting in place of Stewart. Even if he did produce two double-doubles (which is far from likely) in Week 12, Garza’s inconsistency is enough to keep him out of your lineup.