This week, the San Antonio Spurs play five games. This rarely happens and automatically makes most players on the Spurs' roster who play a minimum of 20-25 MPG must-starts in fantasy this week. In contrast, the Hawks, Raptors, and Suns only play two games this week, making all players on their respective rosters less valuable in Week 8 than usual. Knicks guards, Alec Burks and Derrick Rose, who have fully replaced the inactive Kemba Walker, have favorable matchups this week. Likewise, Lakers wings, Carmelo Anthony, and Talen Horton-Tucker play four games this week against teams that allow tons of fantasy points to opposing wings. Using FantasySP NBA Defensive Rankings by position (G, C, F),  here are some players to start or sit in your fantasy basketball leagues for Week 8 of the regular season. 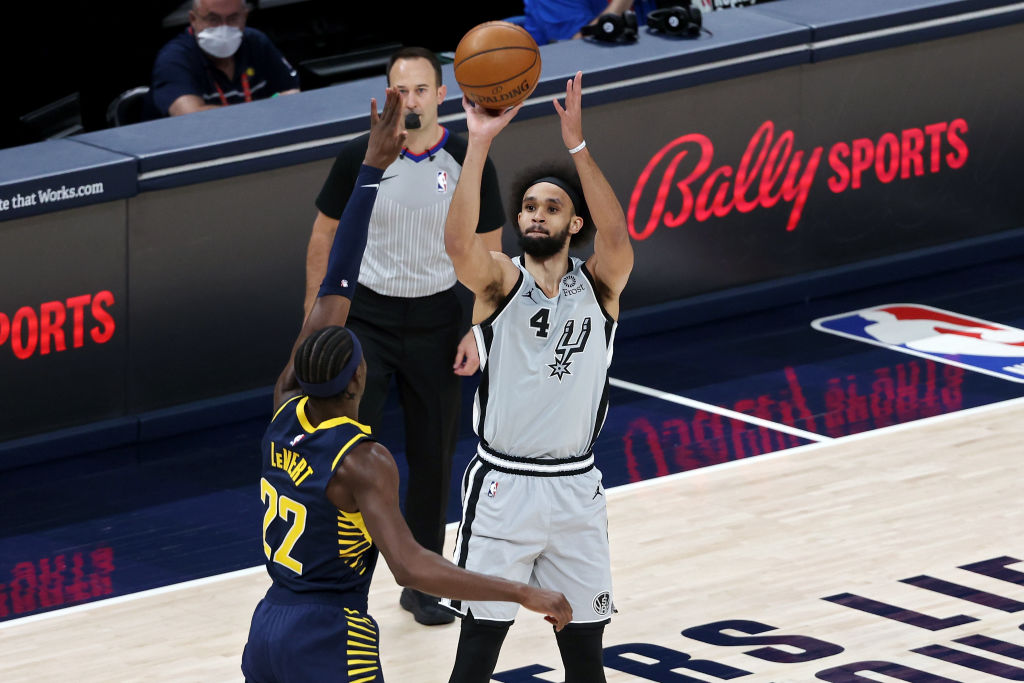 Derrick White has been one of the Spurs’ most valuable players since the team drafted him as the No. 29 selection in the 2017 NBA Draft. White’s NBA career averages sit at a respectable 11 points on 44.5% shooting from the field, 3.6 assists, and 0.8 steals in 25.4 MPG. This season, White is scoring 12.7 PPG, averaging 5.0 assists, and an impressive 1.2 steals per game. Surprisingly, he’s also averaging one block per contest, which ranks first among all point guards this season.  Four of the five games the Spurs play this week are against opposing teams who rank below the league average defending guards. The Spurs face the Knicks on Tuesday who allows the most points this season in the NBA to opposing guards. The Knicks are also on a three-game losing streak and have allowed at least 112 points in each game over that span. Greg Poppovichs’ squad will then play a double-header against the Nuggets (13th-worst defense against guards) followed by a matchup against the Pelicans (10th-worst defense against guards) on Sunday. Outside of a matchup with the Phoenix Suns tonight, the Spurs face four teams between Tuesday and Sunday who rank below the league average at defending opposing guards from a fantasy perspective. Each team allows at least 100 fantasy points of production per game to guards. This week, White has a very good chance to impress fantasy owners. He’s played well over his last four contests, scoring in double figures in each game. He is the guy to start this week, as the Spurs have a very favorable schedule and White will see plenty of minutes in San Antonio’s backcourt.

Although the current backcourt situation in New York is messy, veterans Alec Burks and Derrick Rose have played approximately the same amount of minutes since Tom Thibodeau made the executive decision to remove Kemba Walker from the lineup. Burks has entered the starting lineup and Rose remains New York's, sixth man. Both guards have been playing approximately 25 minutes per game over the last week. The Knicks have four games in Week 8, with the only unfavorable game matchup coming against a Toronto Raptors defense that allows the second-least fantasy points per game to opposing guards this season. New York also faces the Spurs, Pacers, and Bucks (all perimeter defenses that are among the 10 teams that permit the most fantasy points per game to guards this season). Burks has a good chance against these teams to score around 23 or 25 points as he did against the Hawks and against the Nets respectively last week.

Like Burks, Rose’s role as a team leader and productive point guard for the Knickerbockers should increase with Walker out indefinitely. Over the last three games, Rose has scored between 11 and 16 points while shooting over 50% from the field and has produced a handful of assists and rebounds in each contest. D-Rose and Alec Burks should each be started this week.

The Suns only play two games this week. Booker has already been ruled out for the Suns' first matchup of the week against the Spurs. Without even looking at how the Celtics play, you can immediately take him out of your roster this week because he will suit up for a maximum of one game in Week 8. This season, the Spurs and Celtics allow 78 and 82 fantasy points to opposing guards. Even if Booker does play against the Celtics, he wouldn't have a particularly advantageous matchup. Regardless, because he's been ruled out ahead of Tuesday's contest, you can bench him this week. Likewise, you might consider benching fellow Phoenix guard, Cameron Payne, who is healthy but will only play two games this week.

While LeBron is a must-start every week that he's active, Carmelo Anthony and Talen Horton-Tucker aren’t necessarily. However, this week, both Los Angeles forwards have a great chance to produce big numbers as long as they see enough playing time. Anthony and Horton-Tucker are solid starts if they each log 25 MPG. Both wings should step up in Week 8, especially given the favorable matchups. The Lakers play four games this week, including matchups with the Boston Celtics, Memphis Grizzlies, Oklahoma City Thunder, and Orlando Magic. All four of Los Angeles' opponents allow more than the league average number of fantasy points per game to opposing forwards. Notably, the Thunder have the worst defensive efficiency against opposing forwards, allowing a whopping 97 fantasy points per game to the position. The Orlando Magic defense allows 88 fantasy points per game to forwards, which places them only four spots ahead of the Thunder in defensive efficiency against forwards. LeBron James should have a feast this week and should be activated in all formats. Fellow Laker forwards, Anthony and Horton-Tucker, have four matchups against generous defenses, which bodes well for their respective fantasy production.

The Toronto Raptors play only two games this week and don’t have particularly appealing forwards other than Pascal Siakam. Rookie forward Scottie Barnes has played very well this season but only has one favorable matchup in two games this week. On Wednesday, the Raptors will play the Thunder, who allow the most fantasy points per game to opposing forwards. However, the Raptors end their relaxed week against the  New York Knicks, who surprisingly are the most effective team at limiting production by opposing forwards. New York allows just 61 fantasy points per game to the position. Considering the number of games and the difficult matchup against the Knicks, fantasy owners should strongly consider benching their Toronto forwards. That said, Barnes and Siakam are potential DFS gems Wednesday night against the Thunder.

I think you are starting to see a theme here. Fantasy owners should obviously start as many San Antonio Spurs as possible in Week 8. With five games scheduled, fantasy owners should look to activate San Antonio's most utilized big man. Recently, that's been none other than Jakob Poeltl. He has played a minimum of 25 minutes in his last six games and has converted at least 50% of his shots in each of those contests. While he recorded two double-doubles during that span, he was one rebound shy of another double-double on two more occasions during that stretch. Poeltl is becoming a main feature of the Spurs' rotation, and the Austrian seven-footer should be started in all weekly fantasy basketball leagues.

The Wizards only play three games this week, two of which are against teams that perform above the league average on defense against opposing bigs. This includes the Utah Jazz (who allow a decent chunk of fantasy points to centers despite Rudy Gobert manning the paint) and the Indiana Pacers, who allow the sixth-fewest fantasy points per game to opposing centers (25 fantasy points). Myles Turner is one of the best shot blockers in the league, which makes it difficult for opposing big men to produce on the offensive end of the floor against Indiana. Gafford, who is currently averaging 20.2 minutes per game, will have to outduel Gobert and Turner, which seems very unlikely. Gafford is nothing special on offense anyway, as he is coming off back-to-back four-point efforts. Not to mention, Washington likes inserting Montrezl Harrell into the game over Gafford. Although Gafford is a solid source of rebounds and blocks, he is a very risky start in Week 8.