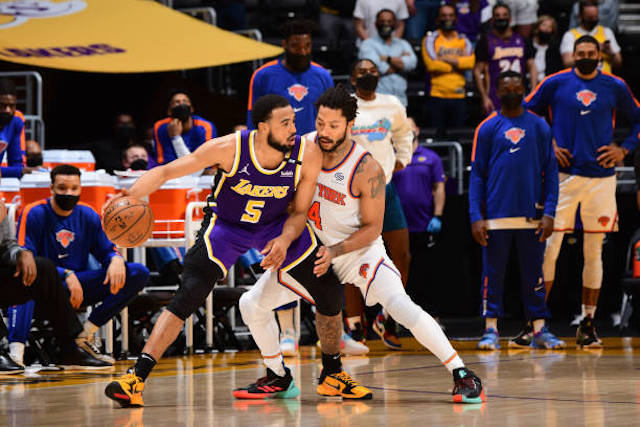 This week, Derrick Rose and Talen Horton-Tucker are two guards who dipped in the fantasy basketball trade value charts making them very affordable to trade for in Week 7. In contrast, DeAndre' Bembry and Christian Wood are two players who you could consider trading away this week as their trade values were too inflated over the last week. Here are some trade targets to buy low or sell high in Week 7.

Talen Horton-Tucker returned to NBA action just weeks ago and impressed fantasy owners because of how he stepped up while LeBron James was still recovering from his abdominal strain. His value took a hit this week and dropped by -1.7 points, bringing him down to his current value of 10.39. This ranks him well below guards De’Anthony Melton and Immanuel Quickley, who both play an average of 20 MPG. Horton-Tucker is averaging 11.9 points and 5.4 rebounds in 30.1 MPG this season. Because LeBron James is entering COVID-19 protocols, THT's minutes should return to a steady 30-35 per game. He has played between 16 and 29 minutes over the last five games. He had an awful game against the Knicks on Nov. 23, shooting 0-of-8 and scoring zero points in 29 minutes. Naturally, his value has dropped. Especially taking into consideration the recent news surrounding LeBron, Horton-Tucker is undervalued this week and should be one of the main guards to pursue as a buy-low target in Week 7.

Kemba Walker was removed from the Knicks’ rotation ahead of Tuesday’s game against the Brooklyn Nets. By default, this indicates that Tom Thibedeau is making serious executive decisions about Walker's role with the Knicks this season. In place of Walker, Alec Burks started. This means that at the point guard position, the Knicks are moving away from Walker, who’s been limited to approximately 20 minutes per game this season. In turn, Thibedeau will be utilizing Derrick Rose more in the rotation when and if Kemba Walker returns.

Gordon Hayward’s value has dropped by almost a point this week, most likely because he only scored one point on Nov. 24 and went zero-of-six from the field. However, he turned things around immediately. Hayward has scored a minimum of 18 points and produced a minimum of 30 fantasy points over his last three contests. The Hornets' two most important wings are Hayward, and the athletic jumper Miles Bridges, who are both valued between 21-22 points on the Trade Value Charts. Hayward's current production in contrast to his decreased value makes him a safe SF to buy low this week.

Joe Harris will be undergoing surgery on his ankle which will keep him sidelined for months while Blake Griffin currently remains out. What we’ve seen over the last few weeks is a steady uptick in minutes for Nets forwards DeAndre’ Bembry. While Bembry is averaging 19.9 MPG on the season, he has played 30 minutes or more in four of the last seven games. In these games, Bembry has recorded respectable numbers. On Nov. 27, he had a very strong game, recording 18 points (9-11 FG), nine rebounds, and two steals. Against the Knicks last night, Bembry shot perfectly from the field but was limited to three attempts. His uptick in minutes and mediocre shooting performances will not be met by significantly higher production than what we saw from his big night against the Suns on Nov. 27. The Nets want Aldridge, Harden, and KD to produce the majority of the offense. Because his value has increased by +1.9 points over the last week, you might consider offering him in a trade that takes advantage of his inflated value to acquire someone within his range. Bembry currently sits at a trade value of 10.48, making him only 1.5-2 points less valuable than players like Duncan Robinson (11.49) or Cam Reddish (12.14). You may be able to get Robinson or Reddish if you offer Bembry and another mediocre player. While that might be difficult, it shows how Bembry is overvalued at the moment and is worthy of selling high in Week 7. However, if he is available on your league’s waiver wire, I suggest adding him to your bench if you are looking for a backup forward. For trade purposes, however, Bembry is a player to consider selling high in Week 7. 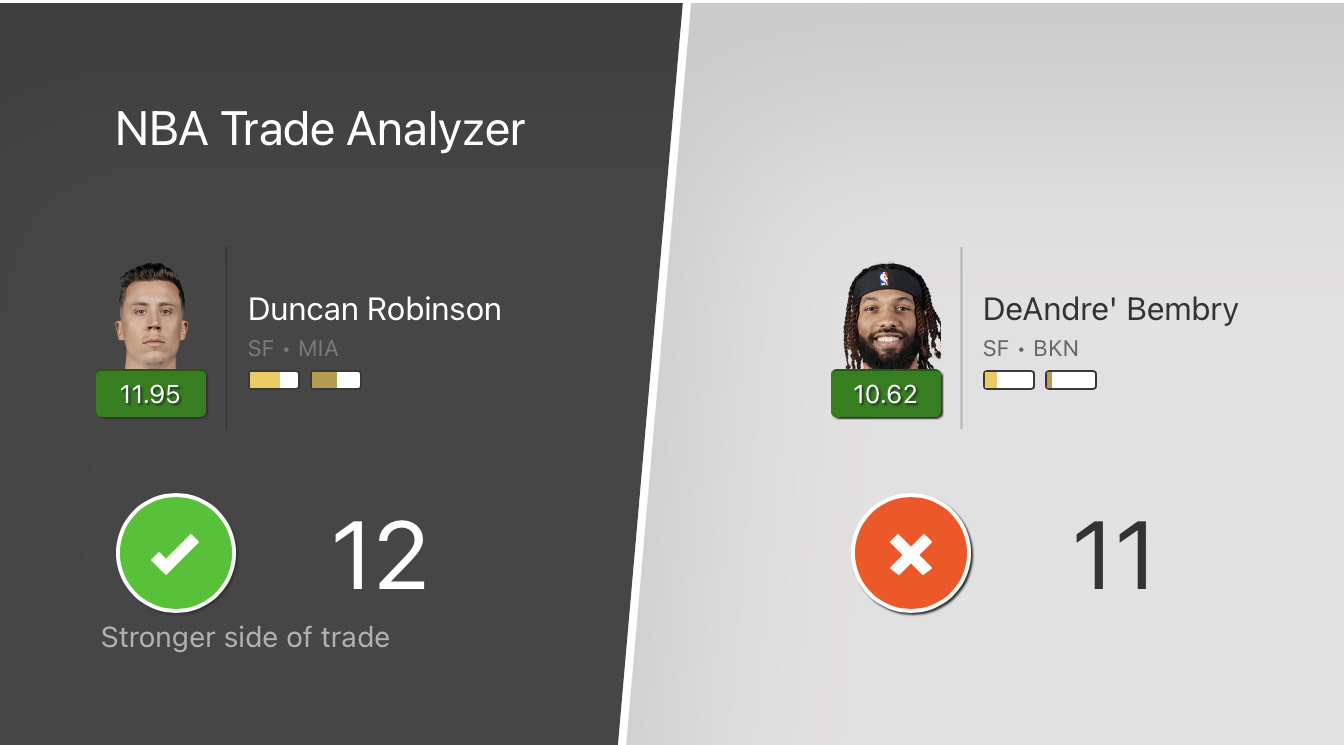 Christian Wood’s trade value sits at 26.61 after it increased by a hearty +3.9 points over the last week. This puts Wood within a point of Julius Randle (27.16), Jarrett Allen (25.64), Bam Adebayo (25.57), and Nikola Vucevic (25.45). Wood is an excellent big man, but his value is very inflated at the moment. If you can acquire Randle or Vucevic for Wood, I'd suggest pulling the trigger. Wood will be within range of better big men for the next few days, offering fantasy owners a small window to try to sell him high and replace him for multiple viable options at the PF or C positions. Wood could be leveraged at his high value in exchange for significantly more reputable bigs who have demonstrated consistency through multiple seasons and who also produce more. Nonetheless, keeping Wood will not hurt you. Wood's value is quite high in comparison to the most valuable bigs ranked ahead of him. 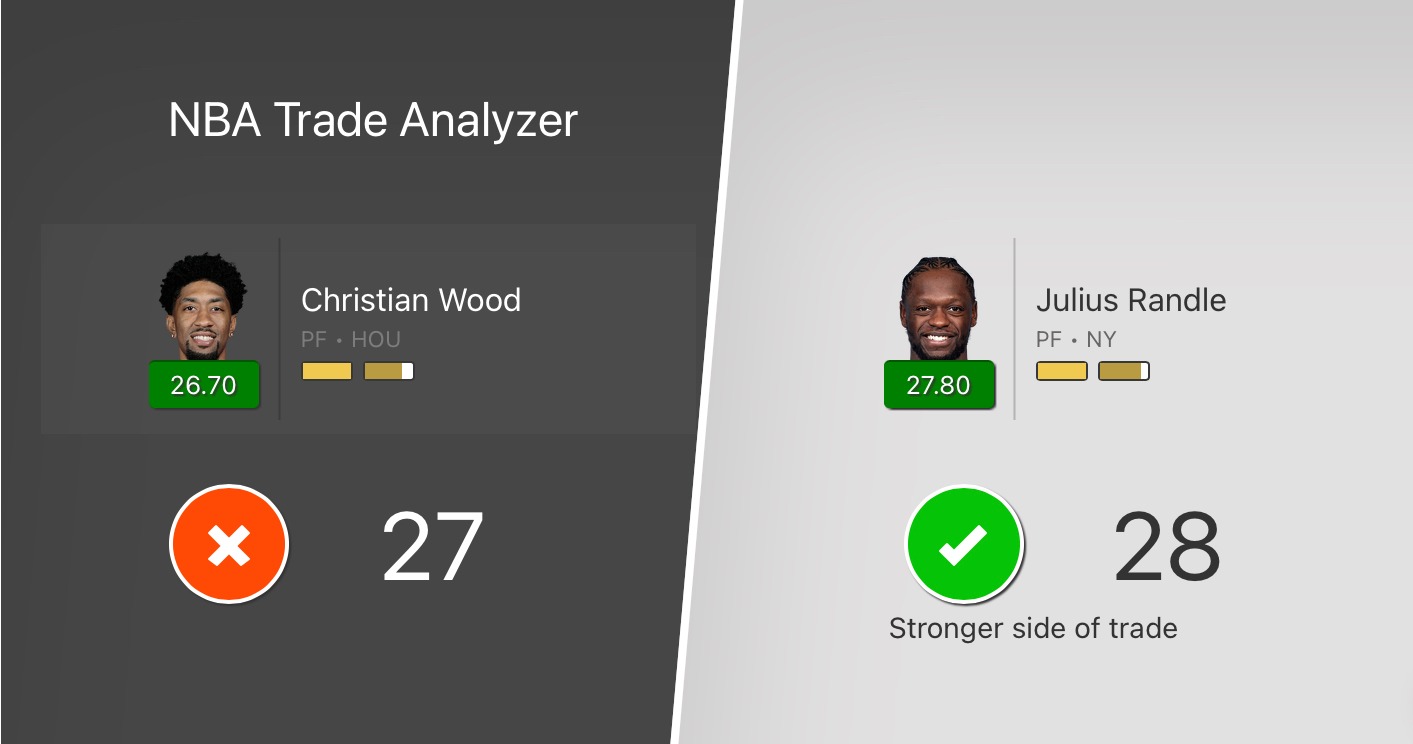