As we head into Week 6 of the fantasy basketball regular season, rookie Cade Cunningham is beginning to showcase why the Detroit Pistons selected him first in the NBA Draft. Kyle Kuzma and LeBron James, now on different teams, have advantageous matchups against the four different teams they are playing next week. Here are some players to start and sit heading into Week 6, powered by our Fantasy Basketball Defensive Rankings. 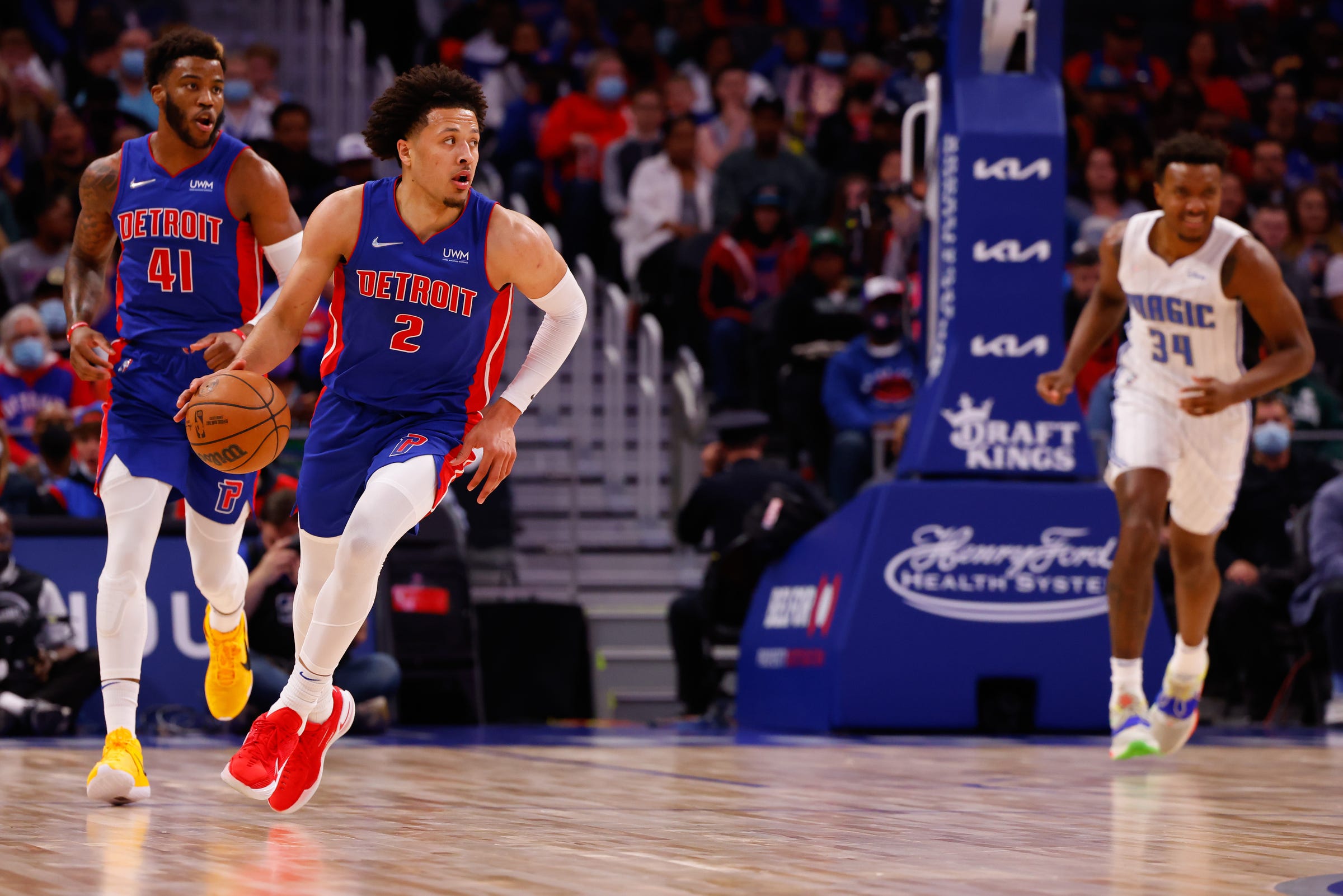 Though he started his rookie campaign late, Cade Cunnigham is off to a hot start. What’s more, is that he is playing four games this week while averaging 31.0 MPG through 10 games this season. The first overall pick in the 2021 NBA Draft is starting to make his presence felt around the league. He’s averaging 14.2 PPG but has already recorded a 25, 20, and 19-point game within the first 10 starts of his NBA career. While their first game this week is against the Heat, who are currently the sixth-best defense against opposing guards in the league, the Pistons' next three games are against teams that rank in the bottom half of the league at defending opposing guards. The Clippers (100), Lakers (103), and Bucks (105), each allow more than 100 fantasy points of production per game to opposing guards. If this holds true, Cunningham has three very advantageous matchups at the end of the week only preceded by one more challenging matchup against a Heat defense capable of locking down opposing shooters.

Mills is coming off of two excellent games for the Nets while he continues to distribute the ball for the team that Kyrie left behind. With Joe Harris out, Mills continues to play 30+ MPG per game. Mills' veteran experience is starting to shine and he's also playing much more than Bruce Brown, earning Steve Nash's confidence and getting the minutes to match the starting nod.

A couple of weeks ago, Brunson was a must-start and one of the hottest players to target on the trade market. For Week 6, Brunson should stay on your bench. The Mavericks only play two games this week against the Clippers and the Wizards. Washington is the second-best team in the NBA at defending guards, only allowing 89 fantasy points per game to the position. Brunson has played well this season, especially in the absence of Luka Doncic. This week, however, he is only playing two games, one of which is against the second-best defense at limiting opposing backcourts. Therefore, Brunson is the guard to sit this week.

LeBron made his triumphant return from an injury on Friday in a 108-130 blowout defeat to the Boston Celtics. He shot 10-of-16 from the field, scoring 23 points and as expected, played no garbage time. He didn’t face a minutes restriction because he can handle it, as demonstrated in his first game back. With LeBron back, the Lakers are at full strength besides a few bench players. James will have another All-Star year this year, and he’s been itching to return to action. This week, James will compete against the Knicks, Pacers, Kings, and Pistons. In none of those games do forwards have a particular advantage. For these matchups, he will be defended by Evan Fournier, Malcolm Brogdon, Harrison Barnes, and Jerami Grant. In each of those four scenarios, the advantage is to LeBron regardless of what the defensive rankings say. He’s going to bulldoze through those teams. The Lakers are letting King James do his thing without any sort of restriction, so James will be back to 30+ MPG. He’ll have plenty of time on the floor next week to dominate. Look for him to produce around 23 points, eight rebounds, and seven assists per game, while chiming in on the defensive end as well.

The Wizards are matching up against three of the 10 worst-ranked teams at defending opposing forwards. The Thunder (29th), Hornets (23rd), and Pelicans (20th) all allow 84+ fantasy points per game to forwards. This week, all of those teams are facing Kyle Kuzma. Kuzma is almost averaging a double-double this season, scoring 13.6 points and hauling in 9.2 rebounds in 33.2 minutes per game. Kuzma has a very advantageous schedule ahead of him this week, which is why you have to start him. He’s also scored less than six points on Nov. 17th and Nov. 20th, so Kuzma will be poised to have a bounce-back week against what looks like a very easy schedule for him at the forward position.

Cam Reddish is the guy to start and claim off of waivers this week. Gallinari is the guy to sit, and perhaps even (not yet) consider dropping. The Hawks are keener on playing their younger players. Reddish is a player who the team wishes to continue developing. This means that in Deandre Hunter’s absence over the coming month, Reddish’s role will likely be much more significant than Gallinari’s. Do not make the mistake of starting Gallinari over Reddish or Bogdan Bogdanovic. Gallo is scoring 7.6 points on 38.0% shooting from the field in less than twenty minutes played per game. Reddish has played 27+ minutes over the last two games for the Hawks, and scored 19 (8-14 FG) and 17 (7-13 FG) respectively in each of those contests.

Ayton has a good schedule ahead of him for the upcoming week. The Suns are playing against one average and three below-average teams at defending opposing centers. Among them are the  New York Knicks, who are tied with Dallas as the worst teams in the NBA at defending opposing big men. The Knicks and the Mavericks are currently allowing 42 fantasy points per game to opposing centers. The Suns will face the Knicks on Friday, Nov. 26, and Ayton will likely win his matchup against Mitchell Robinson quite easily. The single potentially challenging matchup for Ayton this week is against the Spurs. Despite them being an average-ranked team against opposing big men, I think Ayton has the advantage over Jakob Poetl or Thaddeus Young. Plus, with Frank Kaminsky currently sidelined, the Suns may have to lean on Ayton slightly more on the offensive end of the court. Ayton has tallied five double-doubles in six of his last games. He was two points of making it six straight double-doubles when he recorded eight points and 12 boards against the Mavericks on Friday. Look for Ayton to produce four consecutive double-doubles in Week 6 of the fantasy basketball season. Ayton is currently averaging 14.9 points and 12.2 rebounds per game.

The Magic have a tough week ahead of them. Specifically, players like Wendell Carter Jr. and Mo Bamba have particularly difficult matchups looming. Orlando will face four teams that are all above average at defending opposing centers. Carter should remain on fantasy basketball benches this week especially because his minutes have decreased recently. He had a terrible performance the other night, only scoring one free throw. The Magic face the Hornets, Bulls, and Cavaliers next week, all teams that are above-average defending opposing bigs. Cleveland ranks fourth while Chicago ranks sixth, each allowing 24 fantasy points or less against opposing centers per game. Carter has bad matchups next week but also is playing terribly. Last night, he was restricted to 14 minutes as a result of his one-point performance against the Nets on Nov. 9. Therefore, he’s the big man to keep warming your bench this week.

​​FantasySP is developing betting tools to provide users with something nobody else in the industry can offer. Upgrade to an Edge+ account today and get 50% off your first year at just $99.99 for the year. After a year, the price is going to increase to $199. Lock in your special early-bird deal today!