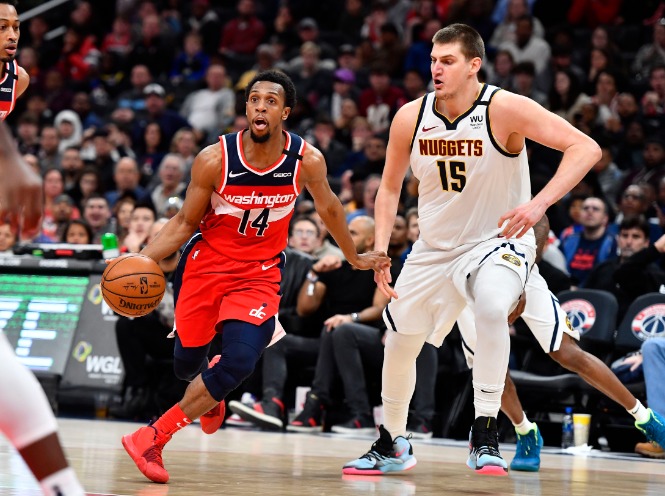 Forget John Wall, Smith's recent play suggests the Wizards may have found their franchise floor general. Alright, calling Smith the next Wall might be a little much, but watch the Wizards’ point guard drop 32 on Denver Saturday night and you’re likely to believe you are witnessing a perennial all-star. A journeyman who has generally been recognized due to his odd first name rather than his basketball ability, Smith has found a home in Washington and has maximized the opportunity. With steady minutes coming his way, Smith has averaged starter-like numbers with 19 points and 6 assists over the last week. Fantasy owners in need of guard help should immediately grab him off the waiver wire.

Rostered in less than a third of all fantasy leagues, Doumbouya has provided Pistons' fans with flashes of elite potential over the last week of play. The recent lottery pick cracked Detroit's injury-ridden rotation with hopes of serviceable production as a temporary fill-in, yet has made the case for consistent floor time with averages of 12 points and 8 rebounds over his last three games. With both youth and playing time on his side, Doumbouya should be scooped from the waiver wire quickly.

Osman has emerged as an efficient secondary scoring option behind Kevin Love for the Cavaliers, and with Love likely out the door by the trade deadline, the lengthy young wing should receive extended opportunities on the offensive end. Over the last week of play, Osman has averaged 15 points per game including a 22-point outburst in a loss to the Thunder. The young Jedi may not yet have the offensive repertoire to produce fantasy-starter caliber stat lines on a nightly basis, yet as the Cavs roster continues to be stripped of viable shot creators, Osman's numbers are likely to increase in the coming weeks.

Before you even read this paragraph right here, I want you to check your league's free-agent pool. If you happen to own a team in one of the 56 percent of leagues where Brown remains unemployed, give that man a job. This season's Wizards may not win a lot of basketball games, but boy can they put points on the board. Brown has utilized extended minutes off of Washington's bench to establish himself as a rare mainstay within a fluctuating rotation. Playing in DC allows Brown the offensive freedom necessary to essentially experiment with his shot-creating with little restriction, and he is therefore capable of boosting fantasy lineups on any given night.

A knock-down perimeter shooter with the size to find space around the arc, Bjelica has shown the ability to occasionally explode for high-scoring outings despite limited minutes. With young big man Marvin Bagley out indefinitely for Sacramento, expect Coach Walton and the Kings to continue to allow Bjelica to find himself offensively. Nonetheless, Bjelica remains difficult to trust within one's fantasy lineup without demonstrating an ability to consistently assert himself as a scoring threat. If the Serbian product remains available in your league, he's worth adding to your bench on talent alone, but I can't recommend throwing him into the fire.