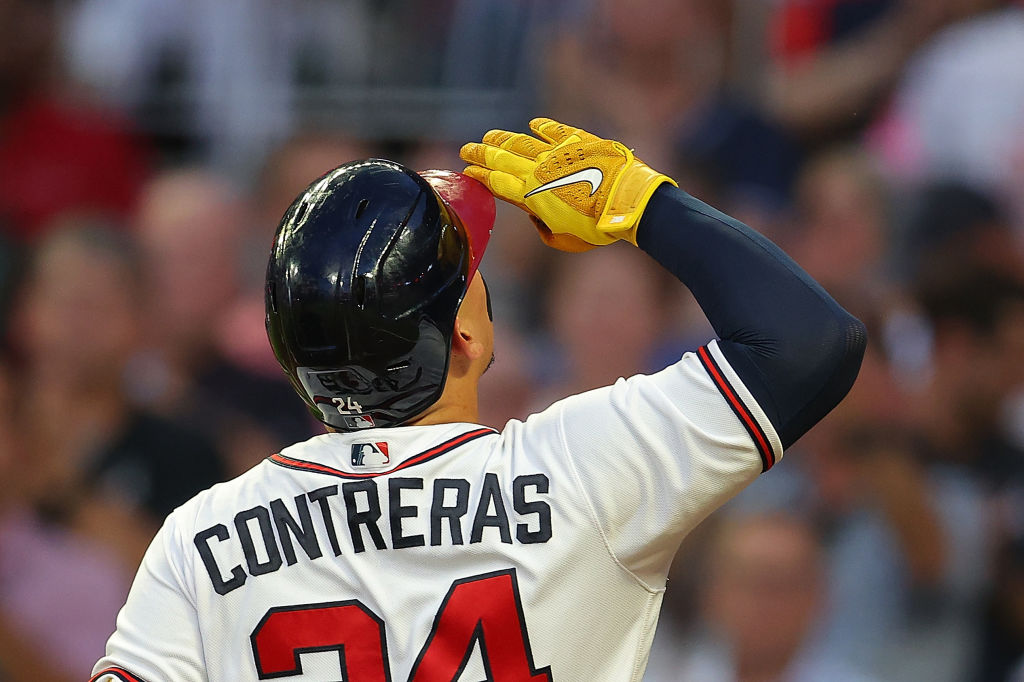 As we head into the second half of August, decent free agents on the 2022 fantasy baseball waiver wire are becoming harder to find. In Week 20, William Contreras is one of the hottest targets as he's hit five home runs in his last 15 games. Elsewhere, rookie first baseman Joey Meneses has had a sensational debut for the Nationals. In his first 11 MLB games, he's hit .385 and is currently rocking a .861 OPS.

We'll also take a look at starting pitchers Braxton Garrett of the Marlins and Keegan Thompson of the Cubs, who are pitching well and are still available in many fantasy baseball leagues. Let's dive in!

While Contreras is an average player, he’s played in virtually every game for the Braves since mid-May. In August, he’s getting four at-bats in most games. Over 51 ABs this month, Contreras is hitting .255 with 13 hits, six RBIs, and 24 total bases. In total this season, Contreras has a BA of .258 in 2022 with 57 hits, 16 homers, and 32 RBIs. Since he is playing virtually every night for the Braves, Contreras is a valuable fantasy catcher to pick up in Week 20. In his last 15 games, he's recorded 16 hits for five homers and nine RBIs. He just hit a solo homerun again against the Mets last night to give them the first score of the game.

He is available in more than 40% of fantasy baseball leagues right now.  If you need a catcher, Contreras could be your guy.

Nationals rookie first baseman Joey Meneses got his start on August 2 and has only played in 10 games so far this season. In 39 total ABs, Meneses has recorded 15 hits for five home runs and seven RBIs. He’s batting .385 through his first 11 games in the major leagues. Meneses also has an impressive OBP of .429 meaning that he’s gotten on base approximately 43% of his 39 ABs this season. What makes him so attractive in Week 20 is the fact that he is available in almost 70% of fantasy baseball leagues. The Nationals’ new first baseman is off to an amazing start as a rookie in August. This first baseman from Sinaloa, Mexico should continue to flourish for the remainder of 2022 as the 39-78 Washington Nationals have no reason to bench the rookie corner infielder.

Cubs’ third baseman Patrick Wisdom has played in 109 games for the Chicago Cubs this season. In 2022, Wisdom has produced 85 hits for 170 total bases, 22 doubles, 21 home runs, and 54 RBIs. While his .221 BA this season isn’t great, he has a respectable OPS of .760. Wisdom has had a whopping 384 at-bats so far this season, showing the extent to which his role with the Cubs is vital. Though he is only available in approximately 30% of fantasy baseball leagues at the moment, Wisdom is a highly consistent player who if available is certainly worth picking up in Week 20.

Yankees shortstop Isiah Kiner-Falefa is one of those guys who’s been on the field almost every game this season. He’s played in 104 games for the Yankees this season and has recorded 95 hits on a .270 BA for 36 RBIs. Over the last 30 games, he’s recorded 28 hits for 16 RBIs for a solid .277 BA and .318 OBP. While he isn’t a power-hitter, Kiner-Falefa can hit ground singles and doubles pretty consistently for the struggling Yankees who are looking for help on offense wherever they can get it.

Padres’ outfielder Trent Grisham is red-hot right now. Over the last 15 games, he’s had 11 hits, five home runs, and 11 RBIs. Though he’s only batting .201 on the season, he’s hit .268 over the last 15 games and .316 over his last seven. Finally, Grisham has played a whopping 114 games for the Padres this season. Grisham hasn’t hit the ball particularly well this season. However, he seems to have found some rhythm in August. Let’s hope this continues with less than two months remaining in the 2022 MLB regular season.

In three of his last four starts, Braxton Garrett struck out at least seven batters. He produced 24 FPTS in his start on July 14, and 25 FPTS when he took the mound on July 22. Since then, Garrett has only seen two starts. Though he has a rough 2-6 record when starting at the mound for the Marlins this season, he’s struck out 71 batters for a total of 68.2 innings pitched this season. He’s also maintaining a respectable 3.67 ERA, which is inflated as a result of the team for whom he plays for. There are reasons why Garrett isn’t rostered in more than 65% of leagues at the moment. However, he’s been striking out a lot of batters this season and seems to be pitching even better as of late. As a result, he’s a very available starting pitcher to consider picking up. He’ll have at least two more starts in the month of August.

In five of his last eight starts at the mound this season, Keegan Thompson has produced at least 18 FPTS. Over his last two starts, Thompson has pitched at least six innings and produced at least 20 FPTS. He had a huge game on July 26 against the Pirates when he tossed seven innings of no-run ball with seven strikeouts, netting 27 FPTS that evening. Thompson has produced 20+ FPTS in four of his last eight starts. Before that, Thompson played in 11 games for the Cubs between April 9 and June 12 where he produced 12 FPTS or less (including two negative FPTS games) 11 times. Since mid-June, Thompson has been seeing closer to 6.0 IPs per game. Up until June 17, Thompson pitched 4.0 innings or less in 10 of his 11 games. He is pitching significantly better in the second half of the season than he did in April and May. He’s available in just less than 50% of leagues. Thompson has been a starter as opposed to a reliever ever since mid-June. He’s also been pitching much better since then. Together, these factors make him the best starting pitcher to target on the waiver wire in Week 20 of the fantasy baseball season.