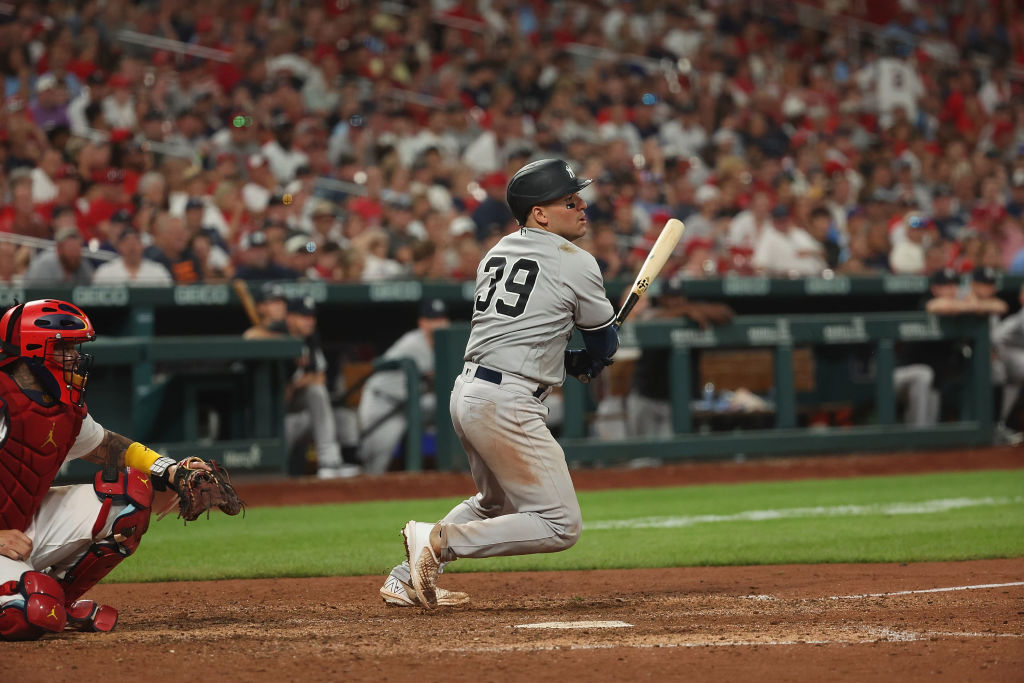 Catcher is one of the most shallow positions in all of fantasy baseball so Jose Trevino’s recent surge has resulted in many fantasy baseball owners eyeing him on the waiver wire in Week 19.

Elsewhere, newly acquired 1B Daniel Vogelbach is off to an incredible start in his first 14 games for the Mets. We’ll also take a look at Marlins SP Edward Cabrera, who’s only started at the mound four times this season due to injury. He returned to the mound Friday and recorded eight strikeouts in his first start since early June. Let’s take a look at the best fantasy baseball waiver-wire pickups in Week 19. This week, all of our free agent targets are available in 60% of fantasy baseball leagues or more. Let’s dive in!

It’s somewhat surprising to see Jose Trevino is available on more than 75% of fantasy baseball waiver wires at the moment. This is especially hard to believe because of how well he’s played as of late. Over the last seven games, the Yankees have struggled. However, Trevino has recorded nine hits and six RBIs in 27 ABs. He’s batted .333 through this stretch complimented by a nice identical .333 OBP. In comparison, he’s batting .266 with a .303 OBP this season through 77 games played so far. Trevino is playing almost every night and is seeing approximately three ABs or more per game. The Yankees catcher this season is a consistent and reliable option at the position who fantasy owners should seriously consider hunting down from waivers this week.

Daniel Vogelbach is becoming one of the MLB’s fan favorites. He’s a heavy guy and certainly isn’t a fast base-runner. However, he’s been off to an incredible start since joining the Mets. In his first 14 games, Vogelbach has recorded 13 hits, including two home runs, three doubles, and seven RBIs in a total of 39 ABs. He had another great game against the Reds last night, getting two hits including one double for one RBI.

Since being traded from the Pirates, the big third baseman has batted .333 with a .480 OBP. In his first 13 games for New York, Vogelbach has put together an impressive 1.044 OPS (.564 SLG + .480 OBP). Since he’s available in more than 85% of leagues, Vogelbach is an easy pickup and a great option at first base, especially because of his red-hot start with his new team since leaving the Pirates.

Edward Cabrera was dealing with right elbow tendinitis in mid-June and missed about two months of baseball. He just returned to the mound on August 5, his first start for the Marlins since June 12. In that game, Cabrera recorded eight Ks and produced approximately 17 FPTS.

For a guy who hadn’t pitched a game since early June, Cabrera returned to the action red-hot. In his first two starts of the season (June 1 & June 7), Cabrera produced 27 and 21 FPTS in each game respectively. Through those two starts, Cabrera pitched 6.0 innings in each. He struck out a combined 13 batters and only allowed one run through those two games in early June. While he’s been out for a long time, he had a strong return to the mound on Friday night. He is available in more than 50% of fantasy baseball leagues and is certainly worth picking up. If his right-elbow tendinitis subsides, Cabrera could become the Marlins’ hottest pitcher for the remainder of the 2022 season (outside of Sandy Alcantra).

Over the last 15 games, the Angels' second baseman has recorded 19 hits for eight RBIs, batting .311 with a .333 OBP. These numbers are considerably higher than his regular season BA of .271 and OBP of .312. Notably, Rengifo had a tremendous month of July where he went 31-of-93 at the plate for 11 RBIs, a .333 BA, and a .374 OBP. Right now, he is available in more than three-fourths of fantasy baseball leagues. He’s playing great right now and is widely available for owners to scoop up in Week 19 off the waiver wire.

The New York Yankees shipped Gio Urshela to the Twins alongside C Gary Sanchez before the season began. Over the last 30 games, Urshela has been more efficient offensively, producing better numbers than his regular-season averages through 92 games played. Through this stretch, he’s recorded 29 hits, including five home runs and 19 RBIs. He’s also batted .284 over this stretch, which is better than his 2022 regular season BA of .262. While he’s not playing dramatically better at the moment in comparison to the entirety of the season, he’s improved at the plate as of late. The Colombian third baseman is available in approximately 80% of fantasy baseball leagues right now.

At the beginning of the 2022 MLB season, Braves outfielder Eddie Rosario sustained an eye injury which kept him out for the majority of the 2022 season. His injury required serious treatment, including laser surgery.

As a result, he’s only played in 42 games so far this season, missing every Braves game between April 24 and July 4. His absence this season has prevented him from getting into a rhythm. However, he’s hitting a lot better as of late. Though Rosario has a .174 BA this season, he’s recorded six hits and nine RBIs over his last seven games with a .240 BA. While he isn’t a terrific outfielder, he seems to be healthy and getting into a rhythm after missing the entire months of May and June. Since returning to the Braves on July 4, Rosario has seen at least four at-bats in 15 of 27 starts. This is another positive sign for Rosario, whose role for Atlanta is becoming important. He can be claimed by fantasy owners in approximately 75% of leagues at the moment.

He’s an especially interesting waiver-wire target because of how much better he’s played since returning from injury. In fact, Rosario only recorded three hits and not a single RBI in 44 ABs in 15 games played (April 7 - April 24). In April, Rosario had an abysmal BA of .068. In comparison, Rosario played much better in July, batting .222 with 14 hits and seven RBIs. While these numbers are generally unimpressive, he’s playing even better in the month of August. In seven games played so far this month, Rosario has six hits for nine RBIs in a total of 25 plate appearances. While Rosario is an average outfielder, he’s played much better since returning from injury after missing more than two months of baseball this season. Now that his vision isn’t completely impaired, Rosario has obviously been able to hit the ball better. Rosario has a .271 career BA. Expect him to continue improving his numbers as he continues to build rhythm since returning from a serious eye injury that impaired his vision.