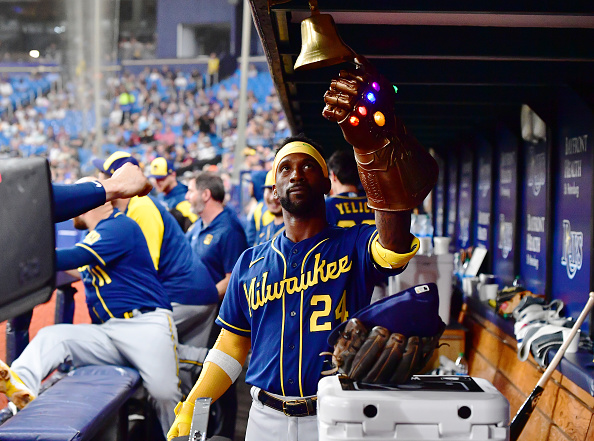 July 4th is right around the corner, and that means that we’re hitting the mid-season in 2022 for the MLB. This week, pitchers Jose Urquidy, Tyler Wells, and Chris Archer stand out as the best free-agent pitchers. We’ll also take a look at Milwaukee’s Luis Urias, who’s hit a homer in each of his last two games but is still available in many fantasy baseball leagues. Another player to consider picking up from the Brewers is veteran outfielder Andrew McCutchen. At 35 years old, McCutchen is no longer the player he once was. But he’s had 30 runs, 59 hits, and seven homers this regular season. Don’t forget that this five-time All-Star (2011-2015) and 2013 NL MVP bounced back with the Phillies to rip 27 home runs just last season. He’s available in more than 60% of fantasy baseball league waiver wires right now. Let’s take a look at the best fantasy baseball waiver wire pickups heading into Week 13.

In each of his last three games, Luis Urias has recorded at least one run, one RBI, and one hit. He’s also hit one home run in the Brewers’ last two games. This season, he’s already tallied 25 runs, 39 hits, and 23 RBIs. Urias is available in slightly more than 40% of fantasy baseball leagues. While Urias is only hitting .233 this season, he’s hit .261 over the last seven games for four runs, six hits, two homers, and six RBIs. He’s certainly not a great hitter, but he’s had 105 ABs over his last 30 games and is consistently in the starting lineup for the Brewers this season.

Jose Urquidy has made some strong starts for the Astros as of late. Notably, in his last game against the New York Yankees where he pitched for 7.0 innings to only allow one hit and one home run. While the Yanks would go on to win the game 3-6 on a stellar three-run Aaron Judge walk-off home run in the tenth inning, Urquidy held his own for seven innings to keep the Astros 2-1 ahead of New York heading into the eighth inning. He’s also thrown a whopping 100+ pitches in each of his last two starts.

Tyler Wells has produced at least 16 fantasy points in five of his last six starts. He’s also struck out at least three batters in five of his last six games. Though he is just 27 years old and is only truly getting going this season with Baltimore, he’s done enough good work in June to make him one of the best available starting pitchers to claim off of waivers in fantasy baseball.

Twins starting pitcher Chris Archer has been heating up as of late. He’s at the very least upped his fantasy value from his recent starts. In his last game, Archer struck out five batters and only walked one of them in 5.0 innings and 78 pitches thrown. He also didn’t allow a run and netted approximately 19 FPTS in that outing. Since he’s available in about three-fourths of fantasy baseball leagues at the moment, Archer is a widely available starting pitcher who’s had some solid outings so far this season.

Andrew McCutchen is competing in his fifteenth MLB season in 2022. While he is the player he once was and is certainly hitting the ball less efficiently (.244 BA), he is still producing enough to be considered a valuable player to pick up heading into Week 13. This season, he’s already played in 62 games and has racked up 242 at-bats. He’s recorded 30 runs, 32 RBIs, and 59 hits this season. McCutchen had an amazing comeback season last year with the Phillies after struggling to find his footing after his last season with the Pirates. In 2021, McCutchen played 144 games for the Phillies for 107 hits, 80 RBIs, and 27 homers. While he’s only hit seven home runs halfway into the 2022 MLB season, he’s hit three of them in the Brewers’ last seven contests.