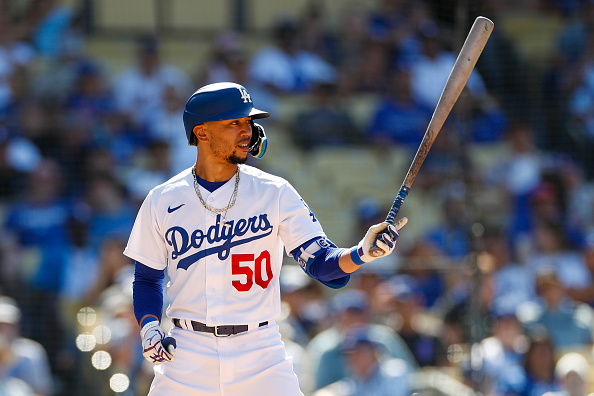 This season, the chase for the NL MVP trophy is more competitive than the AL MVP title. Aaron Judge continues to smash homers and solidify his lead for the AL MVP ahead of Mike Trout. In the National League, Mookie Betts is the front runner, with Manny Machado of the Padres and Pete Alonso of the Mets trailing. Though Mookie is the current frontrunner in the National League, let’s take a look at a few other players who could shake up the voting for the title by October.

For the Los Angeles Dodgers, Mookie Betts has been worth every penny. In 2018, Betts was awarded the AL MVP to help the Red Sox win the World Series. This season, he’s the front-runner in the National League. With a .302 BA this season, Betts has hit 16 home runs and 39 RBIs. He leads the MLB in runs with 52 so far this season. While Mookie Betts is the front-runner for the NL MVP award, the race is much tighter than it is in the AL where Aaron Judge keeps creating distance between him and other potential MVP candidates. Unfortunately for Betts, he's in the middle of an atrocious slump at the moment. However, knowing how Mookie plays, it's hard to envision him not breaking out of this draught in a significant way.

In 2020, Manny Machado left Baltimore to join the San Diego Padres. That year, he finished third in NL MVP voting and helped the Padres reach the postseason for the first time since 2006. Right now, he’s averaging a career-high .320 BA for 71 hits, 40 runs, 37 RBIs, and 10 homers. He just had a huge walk-off run to help the Padres secure a 2-1 win over the Colorado Rockies.

The New York Mets, like the New York Yankees in the AL, are the best team in the National League. First baseman Pete Alonso has been critical to the team's success. With 18 homers and 57 RBIs (most in MLB), Alonso is proving to be at the very least the best player on the best team in the National League right now. Given his power and the strength of the Mets’ offense this season, Alonso is poised to make a ton of noise in 2022.

Bryce Harper had a rough start to his tenure in Philadelphia after leaving the Washington Nationals. In his first two years in Philly, Harper produced a batting average below .270. He was also limited to 58 games in 2020. He only started getting comfortable in Philadelphia last season, finishing with 35 HRs, 84 RBIs, and 151 hits for a .309 batting average. This season, Harper’s playing even better. Through 212 ABs in 2022, Harper has maintained an impressive batting average of .316 and has already swatted 15 homers and recorded 45 RBIs, making him one of the best hitting outfielders in the National League. Right now, his batting average is the second-best in his career (.330 in 2015 with the Nationals). If Harper can continue to reach base and hit for power, he could very well win the National League’s MVP Award.

Ronald Acuna Jr. is having another great season. He’s been especially impressive in June. Though he has a .311 so far this season, he’s batted .400 for a whopping .920 SLG over the last seven games. Through that stretch, he’s only struck out three times for 25 at-bats and recorded four home runs and four RBIs. Though he is the farthest away from contention among all the players we have listed, his astonishing performance over the last few weeks will help to keep Acuna Jr. in the conversation for the 2022 NL MVP honors.