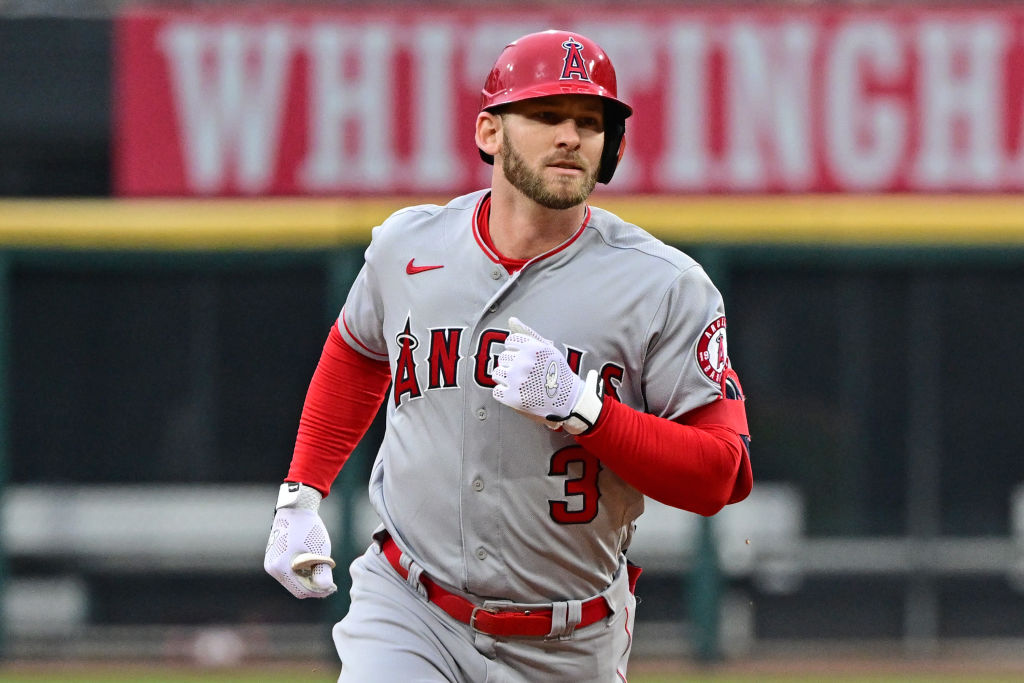 Seeing Los Angeles Angels outfielder Taylor Ward atop the Trade Value Chart is more than a little surprising. Out of nowhere in his fifth year in the majors, Ward has emerged as a real force. The right fielder is hitting a ridiculous .381 with a .492 OBP while chipping in across the board with 24 runs scored, eight homers, 22 RBIs, and one stolen base in 27 games played. Additionally, he has reached base safely in 10 consecutive contests. However, Ward’s previous career highs are underwhelming and regression could be coming fairly soon. Will Ward continue to dominate or should you trade him while his value is at its highest?

It’s Week 6 of the MLB and fantasy baseball season. Some players such as Ward have built on their hot starts, while others are starting to sputter and regress to the mean. Our Trade Value Chart has a lot of movement in both directions as another week of baseball is in the books. Let’s take a look at whose stock is skyrocketing and whose stock is plummeting while looking for some sell-high and buy-low opportunities.

Ward is playing out of his mind. Somehow, Mike Trout is not the best outfielder on the Angels this season and Shohei Ohtani may not be the best hitter in Los Angeles. Those honors belong to the fifth-year athletic Ward who is emphatically exceeding all expectations. Ward is easily going to set career highs across the board this season but is he truly this dominant or should fantasy owners consider trading him while he’s performing like an All-Star? Although it’s impossible to envision Ward keeping his average this astronomical (.381), Ward has been patient at the plate and is part of a very good offensive team. As long as he continues to get on base and hit consistently in this potent Angels lineup, fantasy owners will be rewarded. Don’t trade Ward just yet unless you are offered a deal that’s simply too good to pass up.

The former MVP moved an astounding eight points up our Trade Value Chart and it’s hard to argue with the incredible jump. Goldschmidt’s average was .269 on May 7. Since then, he’s gone on a 12-game hitting streak in which he’s had seven multi-hit games to raise his average to .329. At this point of the season, it's hard to imagine someone raising their average by 60 points in such a short amount of time. Over that 12-game span, Goldy hit .440 with four home runs, 16 RBIs, and 10 runs scored. It’s an unreal pace to continue at, but Goldschmidt’s confidence is riding high and he can certainly keep his average above .300 for the rest of the season. Goldschmidt owners should certainly value him much higher than they did a week or two ago, and see if they can cash in on his hot streak.

Devers has been nearly as hot as Goldschmidt, raising his average about 50 points since May 5. He is riding a 13-game hitting streak in which he’s had seven multi-hit games as well. He’s also raised his slugging percentage by .121 over the last 12 days thanks to 12 extra-base hits during that time frame. After a somewhat slow start, this hitting streak has his numbers back to where you’d expect them. The Red Sox have a huge hole to dig out of and Devers along with Trevor Story needs to keep it going if they're going to get out of the basement in the AL East. Don’t trade him away for anything other than another blue-chip player.

Over the last week, Rasmussen took the rubber twice going a total of 10.2 innings. Over those two starts, he allowed just seven hits, one walk, and one run. He has only recorded one quality start thus far this season, but since a slow start to the year, he has gone at least 5 innings in his last five starts. Over those five starts, Rasmussen has gone 4-0 and allowed only three earned runs. He’s currently sixth in the league with a 0.91 WHIP on the season as opposing batters are batting just .189 against him. He’s made himself an integral part of the Rays’ rotation as the Rays have gone 7-1 in games that he’s started this season. Treat him as a valuable asset if you are lucky enough to have him rostered.

This may be the chance to jump at Carlos Rodon if you’re still interested in him after getting absolutely shelled for 10 hits and eight earned runs in his last start. Rodon had a 1.80 ERA through six starts before being hit up for eight runs. After that nightmare of an outing, his ERA nearly doubled to 3.49. It could be a start that messes with his confidence, but with just one bad start in his first seven, albeit a very very bad outing, he should be just fine. This is a good chance to lowball fantasy owners who are steaming after he completely ruined their fantasy team’s pitching stats for the week. He had one of the biggest slides according to the Trade Value Chart this week with a drop of 6.3 points.

After back-to-back three-hit games, Stephenson has recorded just three hits in his last four games as his hot bat has cooled off in recent days. The Trade Value Chart has him losing a whopping 4.8 points. This may be an overreaction by the chart as one of the Reds’ games was postponed and he only had one at-bat in another game. His average still sits at a lofty .325. He did fail to hit a home run or score a run this week and had just one RBI. I would consider sending offers out if I had him on my roster as his perceived value should still be pretty high when you look at his overall numbers for the season.

As Naylor lands on the COVID list for a few games, his value took a big hit this week after getting a huge bump in Week 5 when he had 8 RBIs after the eighth inning in a wild comeback win fueled by his bat. When looking closer at his stats, just about 40% of his power numbers come from that single game itself. Naylor has four homers and 20 RBIs to date. He hit two of the four and drove in eight of his 22 RBIs in that single game against the White Sox. It’s hard to peg his value as of now, but there will definitely be interest in him when people look at his overall numbers over just 20 games played. He should return to the lineup soon so I wouldn’t let him go for anything less than a solid return of players that can drive in runs and bring some power to the table.