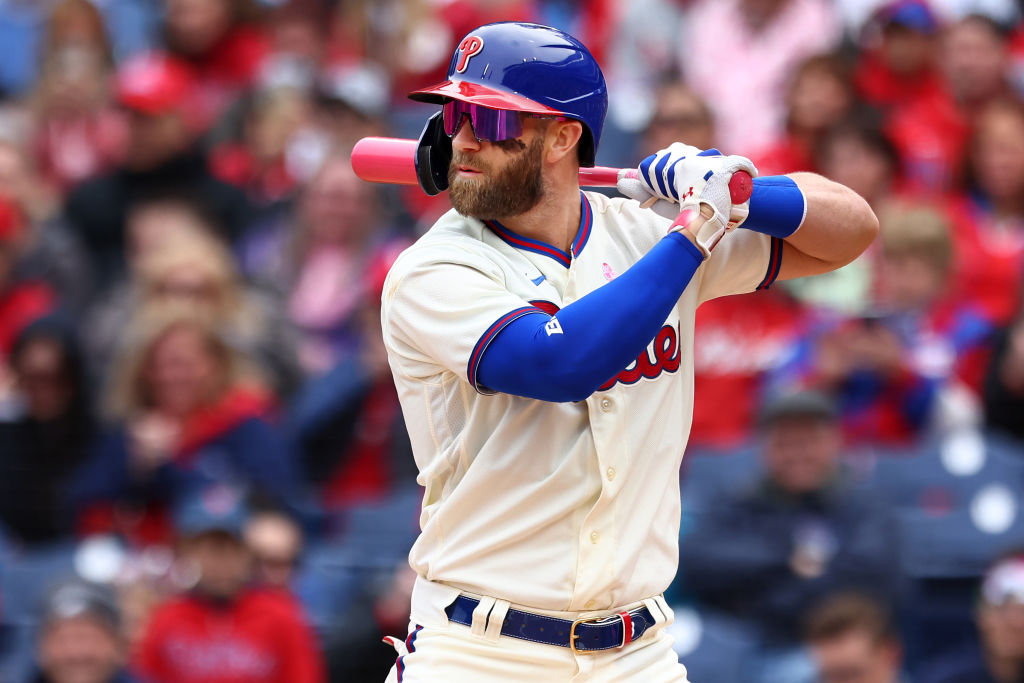 We’re officially one month into the season and roughly 20% through the MLB season. We can see some real trends starting to take shape as players gain and lose value. There were still some pretty sizeable jumps and drops in trade values based on our Trade Value Chart. We’ll take a look at who has been exceeding expectations and those underperforming.

The two-time MVP and former wonder kid is starting to heat up and could be worth offering some solid pieces for before he catches real fire. Since Cinco de Mayo Harper has put together four multi-hit games raising his average by about 40 points. During that stretch, Harper has five extra-base hits, two of which were home runs. A bad game or two stretches could be just what owners need to make their move if they wish to trade for him. For owners who survived a month where his OBP was just .292, I’d suggest waiting it out as better things should be coming from Harper.

If you take out Lopez’s one bad start, his numbers would be absolutely outrageous. In his other five starts, he’s allowed just one earned run. Over his last four starts, he’s been going deeper into games collecting three quality starts that included a sparkling performance going eight shutout innings. Lopez gained 3.1 points on the Trade Value Chart which has him currently as a Top 5 pitching asset to have on your roster. As of now if you have him rostered hold onto him for dear life unless you get an offer with cant-miss players.

Miller is scoring runs at a furious pace already with 20 on the year. The only names you’ll see ahead of him in that category are big names like Trout, Ohtani, Judge, etc.  He’s only 77% owned and 35% started, so it appears that owners aren’t quite valuing him the way that he should be. The Trade Value Chart doesn’t his last week as anything special for him as he only gained 1.5 points there. Miller has been one of the best hitting shortstops this season and deserves to be valued as such. His .333 batting average is seventh-best in the majors and his .400 OBP is 11th.

Arenado has finally come down a little bit from his fuego start to the season. Since a five-RBI performance a week ago, Arenado has had just four hits, scored one run, and driven in just two. He plummeted in value by 5.1 points according to the Trade Value Chart, but it’s just a natural slide for a player who was on an RBI per game pace for the first 20+ games of the season. Arenado is an early MVP candidate so far and owners shouldn’t worry too much. An extended slump would be a glimmer of hope for potential buyers to slide in with a cheaper offer, but for now, I would save your time and hope that he has another rough week or two before even thinking about lowballing someone for him.

After allowing six earned runs in his last five starts, Megill had a mediocre three earned run performance followed by a nightmare outing against the Nationals where he allowed eight runs and only recorded four outs. This outing will completely blow him the sexy numbers that he built up over his first six starts with his ERA jumping from 2.38 to 4.25 and his WHIP going up nearly 25%. If you’re a believer that Megill is the guy we saw over his first five or six starts then this will be possibly the best time to trade for him. Another bad outing would probably sink his value to the point where most buyers wouldn’t want to give up much for him. Sellers need Megill to regain some confidence in his next start to really consider him a high valued pitching asset again.

JP Crawford’s batting average was 373 on May 2nd. Since then he’s cooled off to .330 which is still good for the Top 10 in the Majors. Outside of a great average and a .415 on-base percentage, Crawford has not brought much else to the table lately. Over his last eight games, Crawford has driven in one run, scored one run, and has just one extra-base hit in that span. He hasn’t added anything special in the power game (4 home runs, 11 RBI) and has just one stolen base so there isn’t a ton of value outside of his ability to get on base. He should be able to score more runs going forward if he can continue to get on base, but I wouldn’t count on it and trade someone with much value for him as of now.